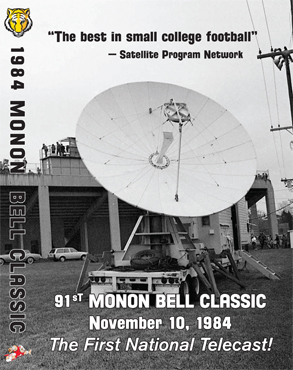 A DVD of the 1984 Monon Bell Classic -- the first game in the historic rivalry between DePauw University and Wabash College to be televised nationally -- has been created by the two schools.  The professionally replicated disc includes the November 10, 1984 contest as seen on SPN (Satellite Program Network) as well as an array of bonus features.

Those interested in obtaining a copy of the limited edition DVD may contact Scott Stetson '86, major gifts officer at DePauw (and a member of the Tiger team in 1984) at scottstetson@depauw.edu or (765) 658-4861.

As noted in a mini-documentary which is included on the disc, the 1977 battle for the Bell was seen regionally on ABC, which sent Jim Lampley to Greencastle to do play-by-play.  Seven years later, DePauw President Richard Rosser and Bill Rasmussen, co-founder of ESPN and 1954 DePauw graduate, had discussions that led to the first national telecast on cable's SPN. Today that channel is CNBC, the powerhouse business news outlet.

The Monon Bell Classic has been televised on several outlets in the years since but the national telecast has become an annual tradition, one that brings alumni together in restaurants and living 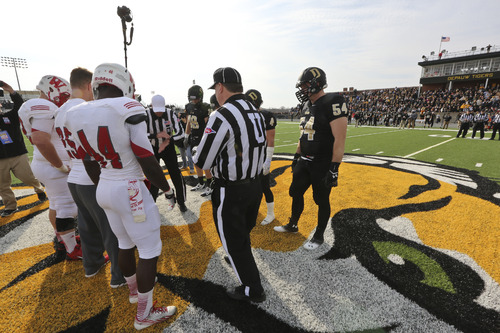 rooms across America each year for viewing parties.

This November's game will mark the 11th that AXS TV has presented in high definition to viewers across the nation.  The network has televised the previous nine DePauw-Wabash contests (2006-14) and also covered the 2003 game. Read more here.

The tape copy that remained from 1984 was on VHS, and Ken Owen '82, executive director of media relations for DePauw, painstakingly restored and color-corrected the video for the DVD in his spare time.

"This is, literally, a time capsule of a pretty special time in the history of the series and it's nice to have it preserved," he says. 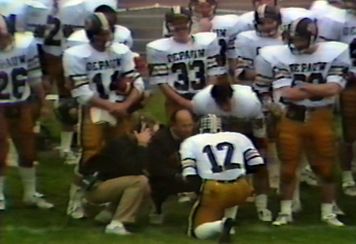 Legendary former football coach Tom Mont, who was DePauw's athletic director in 1984, does color commentary on the telecast, along with Chris Denari, a Wabash graduate who is now the TV voice of the NBA's Indiana Pacers.  President Rosser is interviewed and hosts a campus update that aired at halftime, there's a performance by the DePauw Marching Band and Pom-Pons, and interviews with students from the era as well as Bill Rasmussen.

"The tape was literally on its last legs and it's nice to have this in a form that can be enjoyed, revisited and archived for future fans of the series," Owen adds. 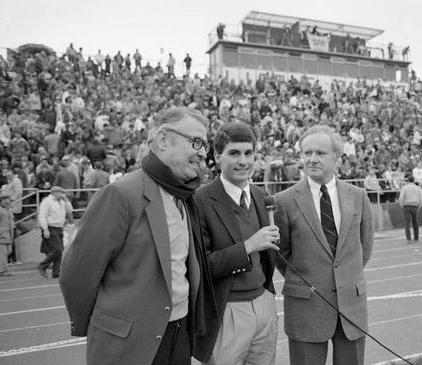 Other bonus features include a photo gallery, a look inside the game day programs (both schools produced one for the '84 game), a remastered version of the original Ballad of the Monon Bell music video from 1985 (which features footage from the '84 telecast), vintage footage of Blackstock Stadium from Fall 1984, former Tiger punter Dave Finzer '82 in action with the Chicago Bears in 1984, and 11 Monon Memories, including a newly recut version of the 1984 game. (photo, l-r: Wabash President Lewis Salter, Chris Denari and DePauw President Richard F. Rosser at halftime of the 1984 Monon Bell Classic)

Jim Amidon, chief of staff and director of strategic communications at Wabash College, created the navigational menus for the disc and art for the packaging.  The finished product was replicated by Oasis Disc Manufacturing. 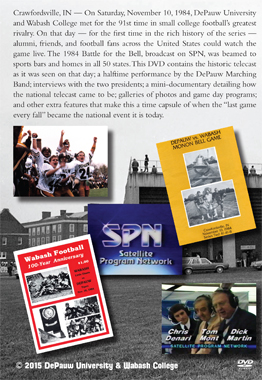 It is the nineteenth contest in the historic series to be captured on DVD. Also available are the DVDs of the 1977, 1993, 1994 and 2000-14 Monon Bell Classics (supplies of past games are extremely limited and the 2006 disc is sold out; the 2008 package is a two-DVD set including all 115 "Monon Memories" produced to that date). An online order form is available here.

DePauw and Wabash first met on the gridiron in 1890.  In 1932, a locomotive bell donated by the Chicago, Indianapolis and Louisville Railroad Company, also known as the Monon Line, was donated and became the winner's trophy each year.

played November 14 at DePauw's Blackstock Stadium. Information on obtaining tickets can be found in this article.