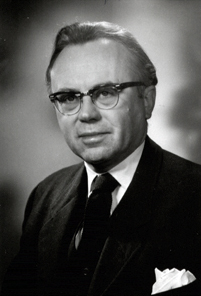 September 2, 1973, Greencastle, Ind. - Syndicated columnist Russell Kirk, described by TIME and Newsweek magazines as one of America’s leading thinkers, will visit the campus of DePauw University on Friday, September 7.  He'll address the topic of  “Protest, Revolution, and the Permanent Things” in an 11 a.m. program in Gobin Church. The public address kicks off DePauw’s 1973-74 Encounter Series.

One of America’s leading conservative spokesmen on political, social and educational issues, Dr. Kirk is perhaps best known for his column "To The Point," which is distributed by the Los Angeles Times Syndicate and appears in more than 100 American newspapers each day.  He has also written more than 18 books, including The Conservative Mind.  Kirk's television program All Things Considered is carried by 135 educational stations each week.  which has sold more than one million copies