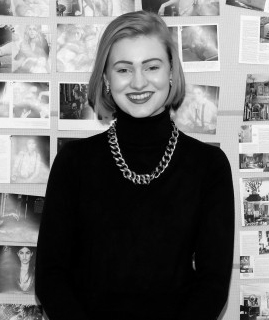 Adrienne Westenfeld, assistant to the editor-in-chief at Town & Country magazine, Jay Fielden, and 2015 graduate of DePauw University, is profiled by Fashion Week Daily.

"I was studying creative writing at DePauw University," she tells the publication, "and I interned at T&C my junior year. I used to sit by the door, which meant I was letting people in all the time. [laughs] About two weeks before I graduated, I got an email from Hearst HR telling me that Jay needed a new assistant. The day I was supposed to present my thesis I came to New York to interview with Jay."

When asked how she got to know Fielden, Westenfeld recalls, "We used to do this series called the T&C Family Album, where we would pull something from the archives -- it could date all the way back to 1870 -- and spotlight it on the site. I found an issue where we had some pieces by [French writer] Antoine de Saint-Exupéry. The Morgan Museum was running an exhibit with his manuscripts at the time. I wrote about his life, and Jay came to my desk and told me he liked it. The editor I worked with was like, This is a big deal…"

Adrienne Westenfeld was an English (writing) major and Media Fellow at DePauw, and minored in media studies and French.  While on campus she was editor-in-chief of the literary magazine, A Midwestern Review, and wrote columns for The DePauw, including one that received an Indiana Collegiate Press Association award in 2013.