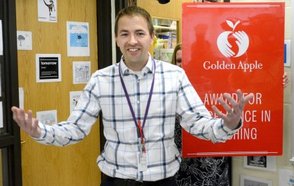 Jeff Grant, a science teacher at Downers Grove North High School in suburban Chicago and 2002 graduate of DePauw University, is the winner of a 2016 Golden Apple Award for Excellence in Teaching.

"The honor is reserved for less than a dozen high school teachers chosen out of more than 400 nominations this year," notes the Daily Herald. "Grant long knew he wanted to pursue a career in science but didn't consider teaching until he observed classes at an Indiana public school when he was a student at DePauw University," writes Katlyn Smith.

"The cool part to me was I got to talk about science, but then I also got to tie in all these other really neat 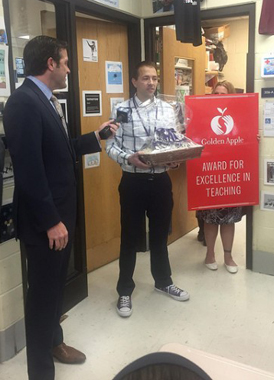 parts of things I didn't want to let go," says Grant. "Like I don't want to say I'm immature, but I don't like to think too adult-like. I enjoy being goofy and I think teaching was kind of a natural draw to that."

"He's always searching for ways to connect kids with science, to make science real, to get them excited about the wonder of science," Scott Kasik, principal of the school, tells the newspaper. "Jeff is a self-described science geek, but I think he's made being a science geek a really cool thing to be." (at left: Grant in his classroom being interviewed by Rob Johnson, WBBM/CBS 2 news anchor and 1990 DePauw graduate)

Adds Michael Heinz, chairman of the high school's science department, "His depth and breadth of knowledge is just unparalleled of anybody that I've seen in the teaching profession."

Grant, who is an alumnus of Downers Grove North, "will receive a $5,000 cash award and a tuition-free, spring quarter sabbatical to study at Northwestern University. He'll also join the Golden Apple Academy of Educators, a group of fellow 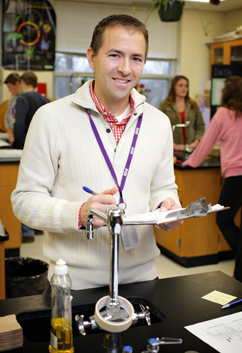 He says, "I don't think I hide much from kids. I kind of wear my heart on my sleeve. I care about them a lot. They're like my family. Every single one of them and that's why I always try to make sure that they know where I stand with them."

Access the complete story at the Daily Herald's website. The news is also carried by the Chicago Tribune.