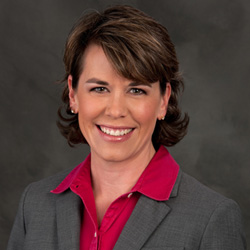 The network notes, "She helped create ESPN’s Universal News Group, which launched in 2015 and was established to foster increased communication between ESPN platforms. She also has played a large role in developing new and more efficient ways for ESPN to use technology to distribute information and video from the field."

Frederickson, who was a philosophy and religion major and Rector Scholar at DePauw, has previously overseen ESPN's bureaus. Before she joined the network's newsgathering efforts, she led all of ESPN’s event motorsports production, including NASCAR and the IndyCar Series. She also had a wide range of experiences as a freelance producer and has won multiple Sports Emmy Awards, including for her work on NBC’s coverage of the 1996 Summer Olympics as well as the opening tease for the 2006 Indianapolis 500 on ABC.