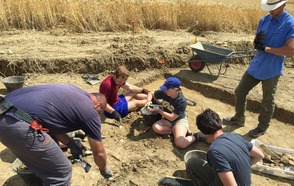 Five DePauw University students and two faculty members are returning from Italy after completing the first season of archaeological excavation at the Vaiano-Gioiella "La Villa" site, in the region of Castiglione del Lago. The academic project is a collaboration between DePauw University, The Umbra Institute (Perugia, Italy) and Intrageo. The fieldwork was conducted with the support of the Comune of Castiglione del Lago and the Archeo Trasimeno Group.

Pedar W. Foss and Rebecca K. Schindler, both professors of Classical studies at DePauw, were among four directors of the excavation. They were joined by DePauw students Manon Carter, Charlotte Delay, Rebecca Kerns, Connor Reed and Adam Rathbun. The project website, including a student blog, can be found here. 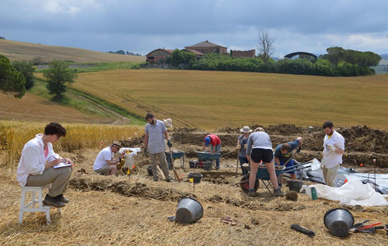 The archaeological site "La Villa" is located on a hill to the north of the Lago di Chiusi, one of three lakes surrounding the Chiana River valley between Umbria and Tuscany. In 2015, the DePauw-Umbra team conducted a surface survey of the area. Based on the data from the survey, Foss and Schindler report that "the site was occupied, but perhaps not continuously, from the 2nd century B.C. to the 3rd century A.D. The distribution of material recovered from the surface in 2015 also suggested that this was a large complex with at least two distinct building areas: one to the south, where fragments belonging to a thermal structure were recovered, and another to the north." Moreover, "To the east of the site there is also an ancient road and a cistern for collecting water, both of which probably date to the Roman period." 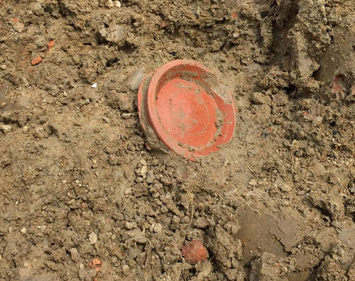 Despite heavy rains that interrupted the beginning of this summer's fieldwork, the team was able to excavate for approximately 15 days. They excavated in four operations on the eastern edge of the site. "Two distinct areas of debris accumulated sue to subsequent activity on the site were uncovered as well as a collapse from a building that included roof tiles and part of a cocciopesto: over 153 kg of tile within an area of 1x4 meters," the DePauw professors report. "The most interesting discovery this season is a channel that was cut into the natural sediment and then covered with tiles pitched to form a triangular covering. This appears to be a drainage system, even though it does not have a bottom that would allow water to flow but was constructed directly on the natural sediment. The channel is at least 6.5 meters long but its overall length remains to be discovered." 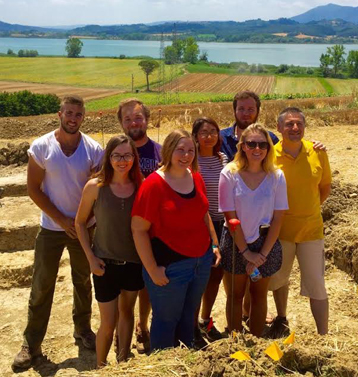 They add, "The materials from the excavation confirm that there was a thermal complex on the site as there are examples of tiles for heating a floor, tubuli for heating the walls, and mosaic fragments. The excavations also uncovered several examples of Sigillata Italica (Aretina) with stamps from the manufacturers. Moreover, the recovery of numerous artifacts with traces of burning indicates that ceramics and possibly metals were produced at the villa complex."

A news conference held to mark the end of the project received coverage from several local outlets, including the Italian Press Agency.  Read more here and here.