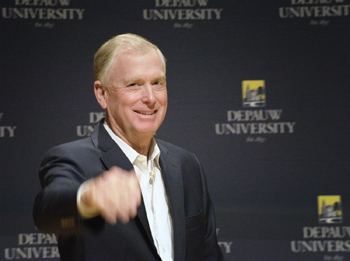 "It’s not the easiest job in the world," the 44th Vice President of the United States, Dan Quayle, says of the post he held from 1989 to 1993.  A 1969 graduate of DePauw University, Quayle is featured in the latest issue of Indianapolis Monthly.

Quayle adds, "I was very blessed to have George Bush, one of the most wonderful people I’ve ever met. Plus, he was vice president for eight years, so he knew what the job was." 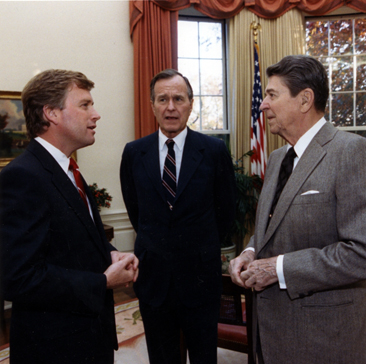 Vice President Quayle majored in political science at DePauw and captained the Tiger men's golf team.  After graduating, he earned a J.D. from the Indiana University Robert H. McKinney School of Law.  He was elected to two terms each in the U.S. House of Representatives and U.S. Senate before becoming vice president.

In March 2015, Dan Quayle returned to DePauw as a guest of the Timothy and Sharon Ubben Lecture Series.  The talk is summarized in this article; video is embedded below.