Jeff Harmening '89 is the New CEO of General Mills 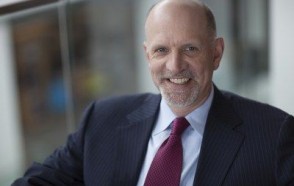 Jeffrey Harmening, a 1989 graduate of DePauw University, was today elected chief executive officer of General Mills Inc. (NYSE: GIS) by the company's board, which also elected Harmening to the General Mills Board of Directors.

A 23-year veteran of the company, Harmening has served as president and chief operating officer since July 1, 2016.

"General Mills has a long tradition of delivering top-tier returns that our shareholders have counted on for generations," said Ken Powell, the current CEO and chairman of the company. "We are focused on growth and feel strongly that Jeff is the right leader for the next leg of our journey." 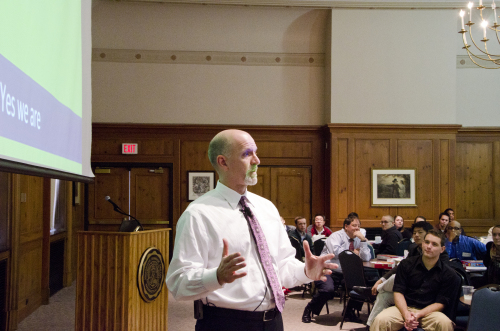 "A key responsibility of a board is leading a thoughtful, robust succession planning process," adds R. Kerry Clark, independent lead director of the General Mills Board. "The board unanimously cast its vote for Jeff as the best candidate to lead this venerable 150-year-old company. Jeff knows how to build talented teams and has extensive experience both in the U.S. and globally. He is not afraid to challenge the status quo and he is a tenacious and resilient leader." (at left and below: Harmening talks with Management Fellows at DePauw)

An economics major and Management Fellow at DePauw, Jeff Harmening received an M.B.A. from Harvard University and serves on DePauw's Board of Trustees. 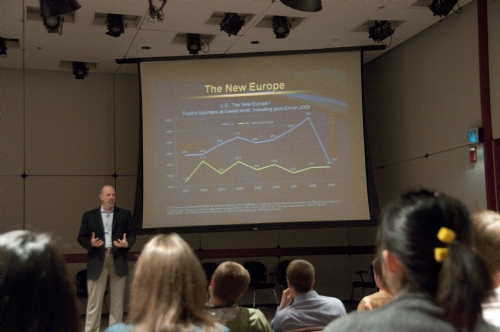 "I am honored to take the helm of General Mills at such an important point in its history," states Harmening. "Building on the legacy of those that have led this great company before me is an exciting challenge and one I do not take on alone. General Mills' employees are singularly focused on driving growth and returns for the long term, and it will be a privilege to help them reach that goal."

Harmening has previously stated, "I have made a few really good, and really important, decisions in my life. Coming to DePauw and participating in the Management Fellows program was one of them."

A frequent visitor to campus, Jeff Harmening's February 2003 address to Management Fellows was covered in this story.