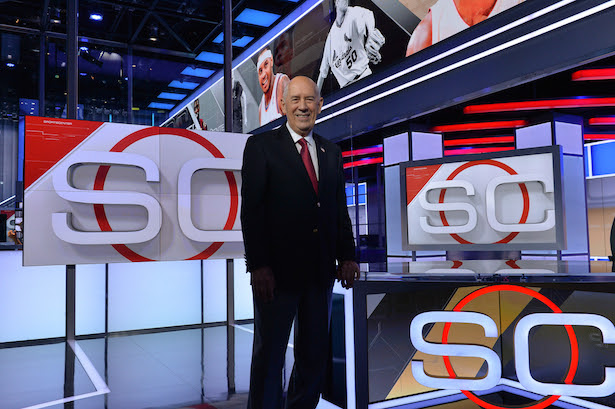 Bill Rasmussen, the entrepreneur and 1954 DePauw University graduate who founded ESPN, will be featured this Tuesday, July 4, on the Audience Network's Fear{less} with Tim Ferriss. The show airs at 8 p.m. EST.

The program "spotlights in-depth, long-form conversations between Ferriss and world-class performers, focusing on how they've overcome fears, made hard decisions, and won at the highest levels imaginable," notes the network. "From icons to lesser-known phenoms, the show will uncover tactics and strategies that work in the real world."

A trailer for the episode is embedded below.

Chris Berman calls Rasmussen "the George Washington of ESPN." Jim Miller, the co-author of the book, Those Guys Have All The Fun: Inside the World of ESPN, told SportsBusiness Journal that Rasmussen "is a guy whose idea gave 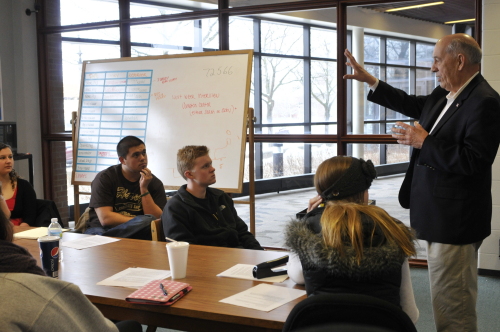 birth to, arguably, the most successful media story of our time."

The author of Sports Junkies Rejoice: The Birth of ESPN, Rasmussen was recognized as one of the 2011 class of "The Champions: Pioneers & Innovators in Sports Business" and in 2016 was inducted into the Hall of Fame at the fifth annual Cynopsis Sports Business Summit.

In 2012, Bill Rasmussen returned to DePauw for two weeks as "executive-in-residence." A Rector Scholar and economics major as an undergraduate, Rasmussen was interviewed that week on TV's Inside Indiana Business and was inducted into the DePauw Media Wall of Fame. (above left: Rasmussen talks with students at DePauw's Pulliam Center for Contemporary Media.