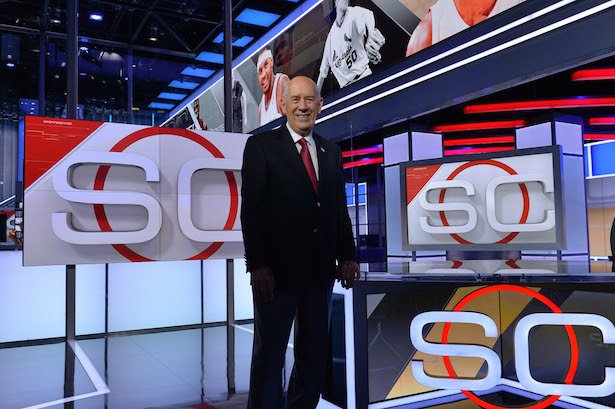 Bill Rasmussen has been called "the George Washington of ESPN" (by longtime anchor Chris Berman) and "a guy whose idea gave birth to, arguably, the most successful media story of our time" (by Jim Miller, co-author of the best-selling book, Those Guys Have All the Fun: Inside the World of ESPN). Rasmussen, a 1954 graduate of DePauw University, will spend the week of the Monon Bell Classic at his alma mater in a visit that will be highlighted by an Ubben Lecture on Wednesday, November 8.

The program will take place at 7:30 p.m. in Kresge Auditorium, which is located within the Green Center for the Performing Arts (605 S. College Avenue). Like all Ubben Lectures, the event is presented free of admission charge and is open to everyone. 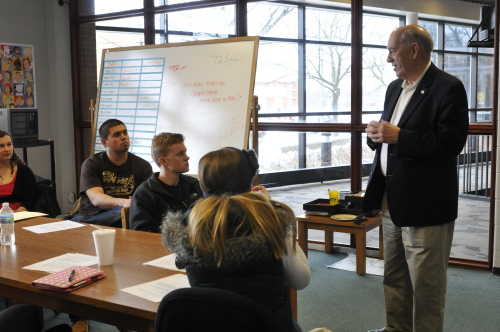 as well as Rector Scholars and will attend the 124th Monon Bell Classic on Saturday, November 11, at Blackstock Stadium (fun fact: Rasmussen was born in the Fall of 1932; the same time the Monon Bell was introduced as the winner's prize in the DePauw-Wabash rivalry -- at left: Rasmussen talking with students at DePauw's Pulliam Center for Contemporary Media in 2012)

Rasmussen came up with the idea for ESPN in June 1978 after losing his job as director of communications for the New England Whalers of the World Hockey Association. He'd become fascinated with nascent satellite technology; as he sat in his car in a traffic jam with his son, Scott (a 1986 DePauw graduate), the the idea of a 24-hour sports station 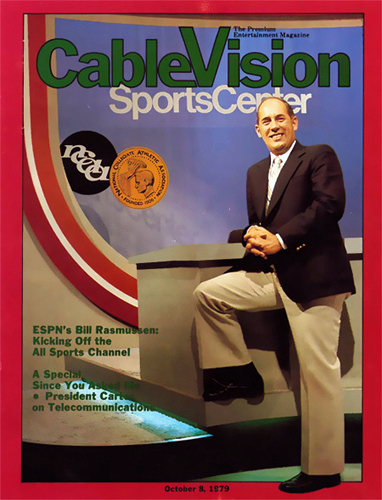 ESPN began broadcasting on September 7, 1979 -- 14 months after Rasmussen's moment of inspiration -- debuting with an inaugural edition of SportsCenter, followed by a slow-pitch softball world series game between the Milwaukee Schlitz and the Kentucky Bourbons.

Thirty-eight years later, ESPN is ranked #32 on Forbes' list of the world's most valuable brands with a brand value of $15.8 billion. The network originally reached 1.4 million customers; now it has approximately 90 million subscribers. In addition to the flagship channel and its seven related channels in the United States, ESPN  today broadcasts in more than 200 countries,operating regional channels in Australia, Brazil, Latin America and the United Kingdom, and owning a 20% interest in The Sports Network (TSN) as well as its five sister networks in Canada.

Bill Rasmussen left ESPN in 1980, but his legend is cemented as an entrepreneur who forever changed the way the world watches sports and television. He's been called

"the father of cable sports" by USA Today, was recognized as one of "The Champions: Pioneers & Innovators in Sports Business", and was named in 1994 by Sports Illustrated as one of 40 individuals who altered and elevated the world of sports in the second half of the 20th century.

"As founder of ESPN, I saw a company and an entire industry explode on the American television scene with breathtaking speed," Rasmussen, who authored Sports Junkies Rejoice! The Birth of ESPN, has said.

At DePauw, he will recount the story of the sports network's creation and also discuss its recent challenges -- including a dwindling subscriber base, the layoffs of 100 employees in the spring, in an 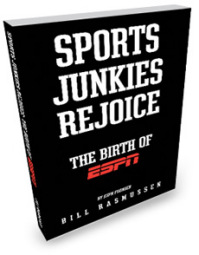 environment of escalating prices for the rights to broadcast major sports.

A economics major and Rector Scholar at DePauw, Rasmussen earned an M.B.A. from Rutgers University and is a veteran of the United States Air Force.  He has been a regular visitor to campus and returned in 2012 to present a 175th Anniversary Distinguished Alumni Lecture, and the Indianapolis Star listed Rasmussen as one of "The 20 Most Interesting People Visiting Indy This Fall" at that time. Rasmussen was an executive-in-residence, meeting with students on campus (which he will do again this November), and sat down with Inside Indiana Business host Gerry Dick for an interview which aired on statewide television.

In July, Rasmussen was featured on the Audience Network's Fear{less} with Tim Ferriss. 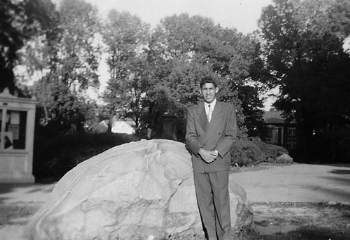 "I was a sophomore at DePauw when ESPN debuted; today's students think of the network as an American institution like Apple or Coca-Cola," says Ken Owen '82, special adviser to the president and coordinator of the Ubben Lecture Series.  "The fact that the concept for ESPN came from the brain of a guy who took classes at Asbury Hall and posed by the Boulder underscores a fact that is well known to people who love this college: DePauw produces people who change the world.  Bill is excited to come to campus for Monon Bell week, and I'm delighted that our students will have special opportunities to hear his stories and interact with him." 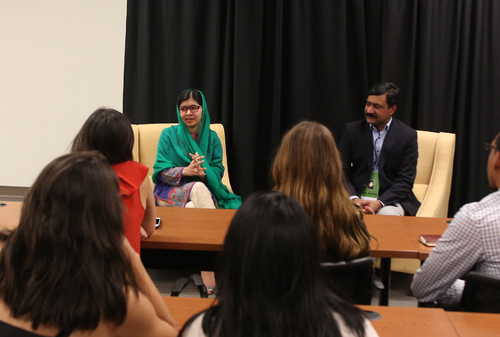 The series has now presented 108 events over the past thirty years, the most recent being a September 4, 2017 visit by Malala Yousafzai, the youngest-ever recipient of the Nobel Peace Prize. (at right: Yousafzai interacts with DePauw students in a class before her Ubben Lecture) 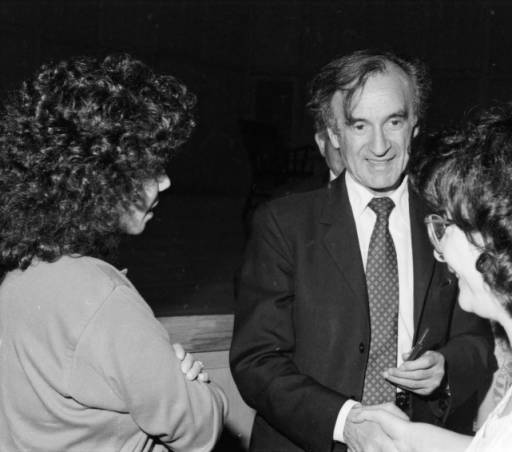