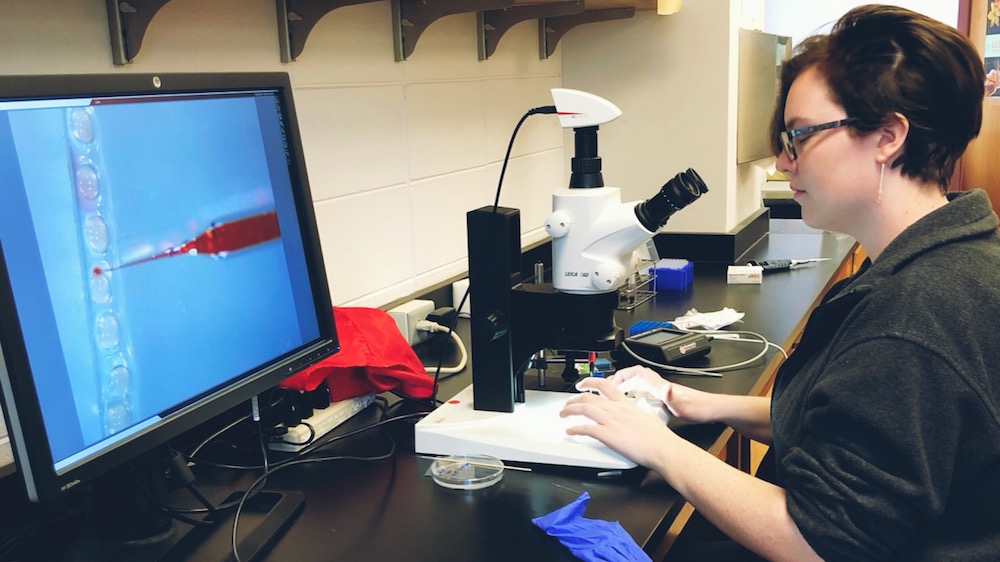 Imagine inserting a roadmap and a pair of scissors into an embryo smaller than this "o."

Twelve DePauw University students and six professors were able to perform the scientific equivalent of that feat earlier this month when they were taught the cutting-edge technology known as CRISPR, which holds the potential of cures for genetic diseases. Three representatives of the Indiana Biosciences Research Institute in Indianapolis also participated in the four-day event earlier this month.

DePauw associate biology professor Pascal LaFontant arranged for Juan Manuel González-Rosa, a postdoctoral researcher at Harvard Medical School and Massachusetts General Hospital, to come to Greencastle to lead the experience. LaFontant met González-Rosa while on sabbatical several years ago and González-Rosa visited DePauw in October 2015 to lecture on heart regeneration in zebrafish, LaFontant’s area of study. When González-Rosa offered to return to DePauw to teach the CRISPR technique to DePauw students and faculty members, LaFontant welcomed the opportunity.

Using a tiny needle, the scientists injected a few picoliters of material – each a trillionth of a liter – into a one-cell zebrafish embryo within 20 minutes of fertilization, before the cell could divide. An enzyme called Cas9 acted like scissors and, following the roadmap provided by guide RNA, cut out a specific gene from the embryo’s genome. In this case, the scientists excised the pigment gene.

CRISPR is widely heralded as offering hope to people afflicted with genetic diseases, especially those caused by a single defective gene, such as cystic fibrosis and sickle cell anemia, and some cancers.

“The potential that exists in CRISPR at this point is not hype,” LaFontant says. “It’s real.”