Commencement DVD is Off to Replicator, Should Ship in 2-3 Weeks 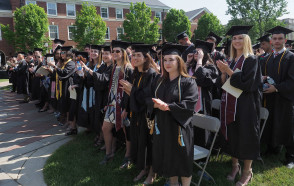 Seventy hours after A Toast to DePauw was sung to celebrate the graduation of 473 members of the Class of 2018, a DVD of DePauw University's 179th Annual Commencement is on its way to a factory for replication.  A limited run of 300 discs are being pressed, are $19.95 for the first disc; additional DVDs sent to the same address will be $7 each (shipping to domestic addresses is included; 7% sales tax will be added to Indiana orders). The disc includes footage of each graduate receiving their DePauw diploma as well as Sunday's dynamic primary address by civil rights legend Vernon E. Jordan Jr. '57, and and array of bonus features.

The disc contains more than five hours of content. In addition to the commencement program, including speeches by Peter T. Gorman '18, recipient of the Walker Cup, and the presentation of honorary degrees to community 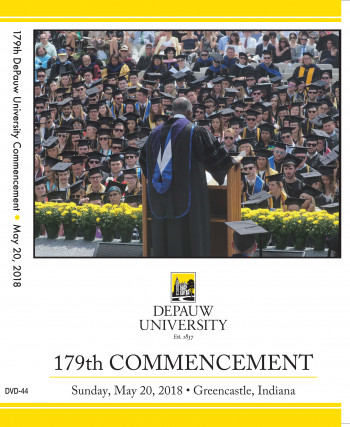 leaders Jinsie Scott Bingham '56 and Dorothy Chapman Brown and Holocaust survivor and forgiveness advocate Eva Mozes Kor, the four-camera presentation shows graduate receiving a diploma. Those looking for a particular part of the program can immediately access what they seek via the DVD's menu. For example, to see a graduate whose last name is Patrick, you click on the letter 'P' in the menu and are immediately taken to the first person whose last name begins with the letter 'P' receiving his or her diploma. Users can also jump to specific speeches, or watch the program from beginning to end. (at left: front cover of 2018 commencement DVD)

The DVDs are professionally replicated, not duplicated, and are housed in a decorative jacket.  They will ship in a few weeks, immediately after they arrive from the replicator, Oasis Disc Manufacturing in New Jersey.

The DVD's bonus selections includes some of the campus highlights over the past four years at DePauw. The first seen is the opening convocation at which the Class of 2018 was welcomed to DePauw. There are also clips of Ubben Lecturers (such as Malala Yousafzai, Jimmy Kimmel, David Hanson and Sophia, Andrew Luck, 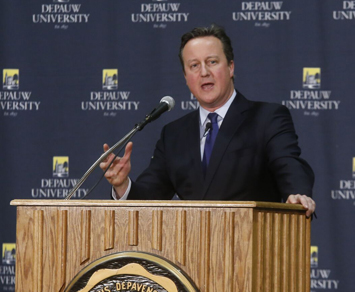 David Cameron, Piper Kerman, Bill Rasmussen '54 and Leslie Odom Jr.); both the groundbreaking for and opening of Hoover Dining Hall; the inauguration of President Mark McCoy; a visit to campus favorite Marvin's; and many other features.

"Monon Memories" of the thrilling 2016 & 2017 battle for the Monon Bell are also there to be revisited, there's a 1993 piece on the history of DePauw's campus (featuring faculty members Preston Adams, Russell Compton and Robert Eccles), and there are other clips from the DePauw Archives.  The disc also includes a photo gallery of the baccalaureate program, DePauw Under the Stars, and commencement day activities.

For more information on the 179th commencement, click here.