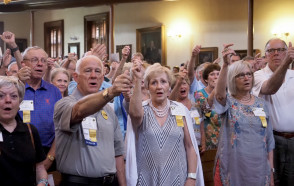 "You are proof that DePauw develops leaders the world needs and it is always good to have you home," DePauw University President D. Mark McCoy declared at this morning's Alumni Convocation. The event, which was held in historic East College's Meharry Hall, is part of DePauw's Alumni Reunion Weekend, which continues through tomorrow. A total of 1,270 alumni have returned to their alma mater.

"It is obvious that much on this campus has changed 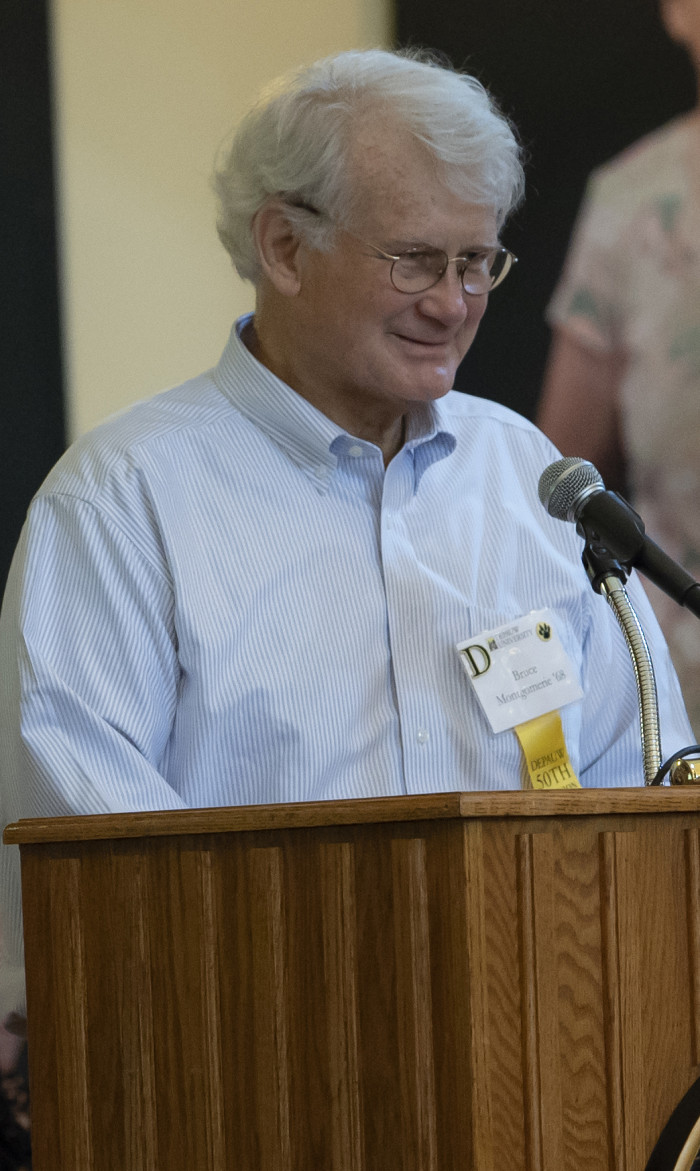 since we graduated," Bruce Montgomerie said in his speech to fellow members of DePauw's Class of 1968. "But I think in the main it’s pretty much the same as it was. It is still a great school."

He added "Given our blessings here at DePauw and in life, I think we have a responsibility to carry on and to do what we can -- at our own time and choosing -- to make this world a better place. I know many of us have been working to do just that. But, in this case, more is better."

A Rector and Old Gold Scholar and football standout at DePauw, Montgomerie retired in 2003 as partner in the New York law firm of Willkie Farr & Gallagher. With his classmates before him, he recalled an era with news events that still echo -- including the Vietnam War and the draft, the assassinations of Martin Luther King Jr. and Robert F. Kennedy, and the widening struggle for civil rights.

"But, somehow, we struggled along. Some went into military service. Others went to graduate school or got jobs. We all started the rest of our lives. We here today are the fortunate ones, and we know that not 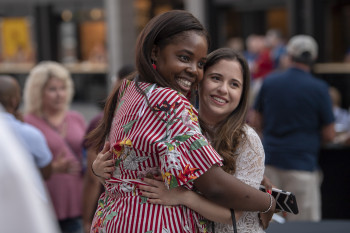 everyone was as fortunate as we. But here we are."

Looking out over the crowd in historic East College's Meharry Hall, Montgomerie reflected, "DePauw sends graduates into the world who become significant contributors to our society. In our class alone, we have accountants, artists, business executives, doctors, educators, entrepreneurs, musicians, nurses, veterinarians, writers, and, yes, even a few lawyers. DePauw graduates make a difference in the world."

The silver anniversary address was presented by Rita Wetterstroem Hyland '93, 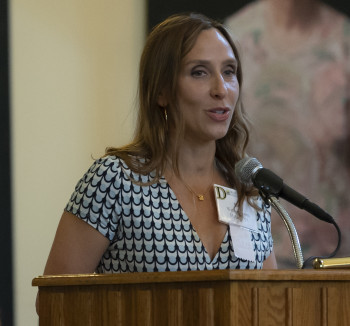 who pointed out, "We were the last class to experience college life without the internet. There were no cell phones. The coolest among us had a CD collection. The rest of us were using tapes to play our music."

The founder of Rita Hyland Coaching continued, "There was no online shopping. Amazon Prime did not overnight our latest need. Instead, we waited by snail mail for our parents to send care packages. And somehow without email we figured out what was going on on campus. Bill Clinton was president, there were nickel beers at Toppers and we all gathered on a Thursday night to watch the season finale of Cheers. Vernon Jordan spoke at our commencement and we drove out of DePauw richer in friends, knowledge and good times than when we began in 89."

Hyland presented her classmates with what she called 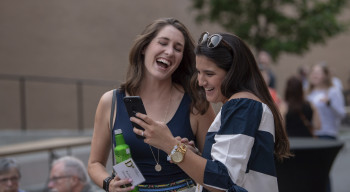 "the secret sauce to re-programming for a more bold, rich, and fulfilling second half," telling them, "you have to leap before you think you’re ready and before the fear-based mind talks you out of it. Research shows that too many live with the regret that they never tested their edges. Get bolder not older, and make your choices in life based in your inspiration not your fear." She added, "Don’t suffer by telling yourself a limited story of what’s possible or rationale in this next half." 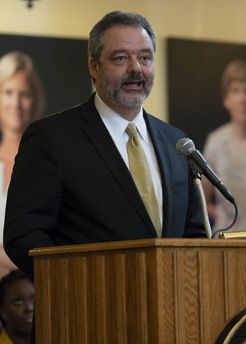 President McCoy told the gathering, "We’ve come back to DePauw not only to remember, but to plan. We can look back at the innumerable successes of the graduates of our first 181 years but we must also look forward to the world that waits the graduates of our next 181. You were able to come to DePauw through the good graces of those that came before you and now you are paying it forward to those that come after. That is the beauty of a DePauw education. We are standing on the shoulders of giants. To today’s students, you are those giants." 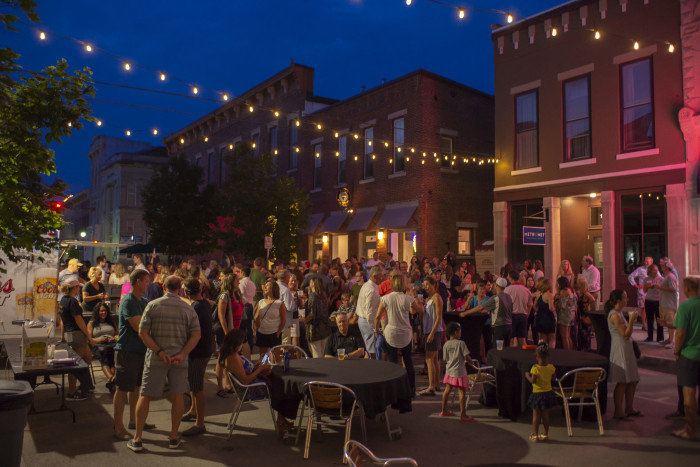 supposed Bill Gates quote that 640K of RAM should be enough for anybody? No one rightly predicted those changes yet you were somehow prepared for them. How? Because our stellar faculty, our liberal arts education and DePauw’s commitment to teach you not 'What to Think' but 'How to Think' set you up for a lifetime of change. More than that, it set you up to lead that change." (at right: Friday night's Block Party in downtown Greencastle) 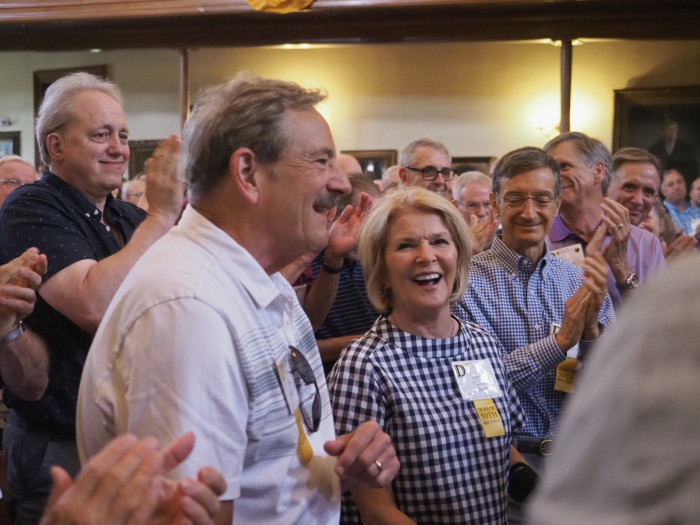 The pace of change continues to accelerate, Dr. McCoy noted, "So we must accelerate and improve our efforts to lead that change. How can we do that? I am humbled and honored to announce that two members of the class of 1968 have donated $20 million to be sure we prepare for that change properly. With this life-changing gift, we will endow a leadership initiative to be certain that every student at DePauw is ready to lead profound change. I’d like to ask you to join me in thanking Steve and Karen Sanger for the newly announced, $20 million Sanger Leadership 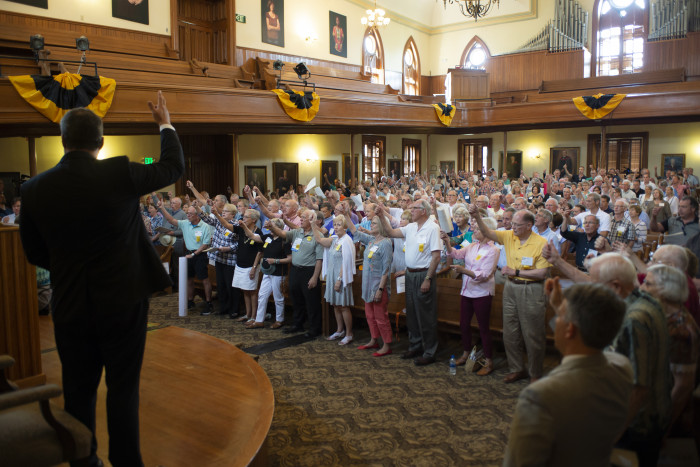 Initiative at DePauw," he stated, and a long ovation followed. (at left: the Sangers respond to the crowd's applause)

Among those in the audience for the event was Charles H. Sheridan '43, who returned to celebrate the 75th anniversary of his graduation from DePauw.

The convocation was followed by a luncheon for the reunion classes. To learn more about Alumni Reunion Weekend, click here.