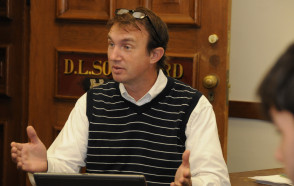 Joseph Heithaus, professor of English at DePauw University, is co-author of an essay published in today's New York Times. Headlined "We Are All Riders on the Same Planet," the work is a collaboration with Matthew Myer Boulton, a writer and a filmmaker and the co-founder and creative director of SALT Project.  It appears in the Opinion section of the newspaper's New York edition.

"My friend Matt Boulton approached me last summer wanting to create something to celebrate the 50th anniversary of a reflection by the poet Archibald MacLeish," Heithaus notes. 'Riders on Earth, Brother in Eternal Cold' appeared in the New York Times on Christmas Day 1968 in reaction to the words and images broadcast to earth the night before from Apollo 8."

"On Christmas Eve 1968, human beings orbited the moon for the first time. News of the feat of NASA’s Apollo 8 mission dominated the front page of the New York Times the next day.

Tucked away below the fold was an essay by the poet Archibald MacLeish, a reflection inspired by what he’d seen and heard the night before. Even after 50 years, his prescient words speak of the humbling image we now had of Earth, an image captured in a photograph that wouldn’t be developed until the astronauts returned: Earthrise, taken by William Anders, one of the Apollo crew. In time, both essay and photo merged into an astonishing portrait: the gibbous Earth, radiantly blue, floating in depthless black space over a barren lunar horizon. A humbling image of how small we are -- but even more, a breathtaking image of our lovely, fragile, irreplaceable home. The Earth as a treasure. The Earth as oasis."

A noted poet, Joe Heithaus won the 2007 Discovery/The Nation Prize for a group of sonnets about poison plants that are the central thread of his first book, Poison Sonnets, published in 2012.  He is one of five "Airpoets," whose poems 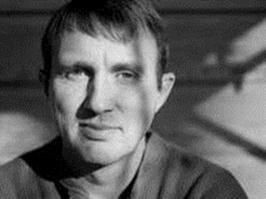 have been integrated into stained-glass window murals in the Indianapolis International Airport and are featured in two books, Rivers, Rails and Runways and Airmail. His poems have appeared in Poetry, the North American Review, the African-American Review and the Southern Review. The professor is one of four DePauw writers featured in Not Like the Rest of Us: An Anthology of Contemporary Indiana Authors.

The professor reflected on the life of children's author Maurice Sendak in a May 9, 2012, Christian Science Monitor story.  In November 2017 he authored another New York Times essay in the wake of Hurricane Nate and the Times published another Heithaus essay in February 2018 in the wake of a school shooting in Parkland, Florida.

In November 2015, Professor Heithaus addressed the incoming Class of 2019 at DePauw's opening convocation. Video is embedded below.