Prof. Jeff McCall '76 Writes of "The Impossibility That Reporters Can Magically Create an Exact Copy of Reality"

Writing of so-called "fake news" for The Hill, DePauw University Professor Jeffrey M. McCall states, "The citizenry must sort journalistic fairness out for itself, find it where it can, and acknowledge the impossibility that reporters can magically create an exact copy of reality."

McCall, professor of communication (media studies) and 1976 DePauw graduate, begins his column by offering, "Americans around the country, including President Trump, decry the journalism establishment for dispensing 'fake news.' Citizens on the left denounce Fox News and right-leaning talk radio hosts for spreading propaganda. News consumers on the right vilify the New York Times, CNN and most other mainstream outlets as blatantly biased. These citizens should save their energy and anger. That’s because all of the news is, in essence, 'fake.'"

He continues, "Any news report is generated through the predispositions, attitudes, beliefs and life experiences of the reporters and editors. It can’t be otherwise. News accounts are concocted through multiple human prisms, all of which distort, exaggerate, warp and/or minimize any particular real event. It is unrealistic to imagine the personal backgrounds of reporters don’t affect the tone of an individual story, and in a larger sense, the topics chosen for the broader news agenda. Given this backdrop, expecting fully objective news reports is imprudent."

A former journalist himself, the professor declares, "Reporting the news accurately, comprehensively and

fairly is an enormous challenge. The governmental and societal chaos today perhaps makes the challenge almost insurmountable. The twentieth century sociopolitical columnist, Walter Lippmann, once wrote that when 'unfamiliar and complex things are communicated to great masses of people, the truth suffers a considerable and often radical distortion. The complex is made over into the simple, the hypothetical into the dogmatic, and the relative into an absolute.' Such effects are in evidence today on news topics ranging from border security to the government shutdown to world economics to cultural rot, and indeed, to the presidency of Trump."

According to Dr. McCall, "Fairness is a skill that can and should be developed," and that "today’s journalistic product is too often characterized by quick hitters, sound bites, viral videos and social media jabs that surely reduce complexities into simplicities. News reporting is mixed often with commentary and subjective wording. The news agenda lurches from one pack mentality fascination to another." 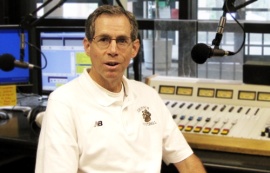 Jeff McCall, who authored the book Viewer Discretion Advised: Taking Control of Mass Media Influences, was a Rector Scholar and speech (communication) major at DePauw and went on to earn a master's degree from the University of Illinois and a Ph.D. from the University of Missouri. The professor is regularly quoted in stories on media matters.  He spoke with Fox News last week about the challenges facing the news division at CBS and wrote another recent column for The Hill on the dangers journalists face.