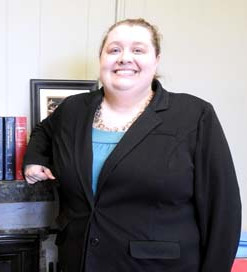 Brittany A. Bulleit, a 2005 graduate of DePauw University, is now prosecuting attorney in Houghton County, Michigan. She has been serving as a chief assistant prosecutor for the office for the past ten years.

The appointment, which was effective April 1, is noted here.

In college, "While spending a semester off-campus, she began looking at forensic psychology programs," reports the Daily Mining Gazette. "That still wasn’t the right fit, but it led her to law school."

In 2005, she was one of three students in the psychology department at DePauw University to receive undergraduate research grants from Psi Chi to support their research on the communication of emotion. Learn more in this story.