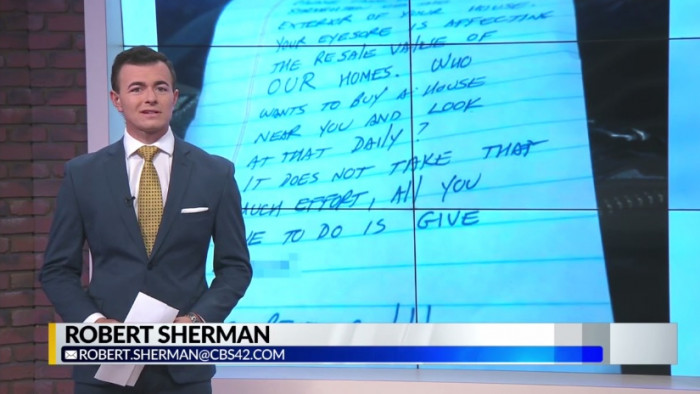 "The reporter who did this, Robert Sherman of our CBS 42 station in Birmingham, said, 'Sticks and stones can break your bones, but words can inspire a whole community," noted today's edition of CBS This Morning.  The program shared a story originally reported by Sherman, a 2018 graduate of DePauw University, on a Pinson, Alabama woman who received an angry, anonymous note from a neighbor complaining about the condition of her yard.  She shared the note on social media and a group of strangers came together for an impromptu clean-up session.

The woman, Randa Ragland, has a 3-year-old who is battling neuroblastoma stage four cancer.

Access his original story at the station's website. A clip from the morning program is embedded below.

Robert Sherman was a communication major and Media Fellow at DePauw, where he was active in student media on WGRE-FM and D3TV. Learn more in this previous story.