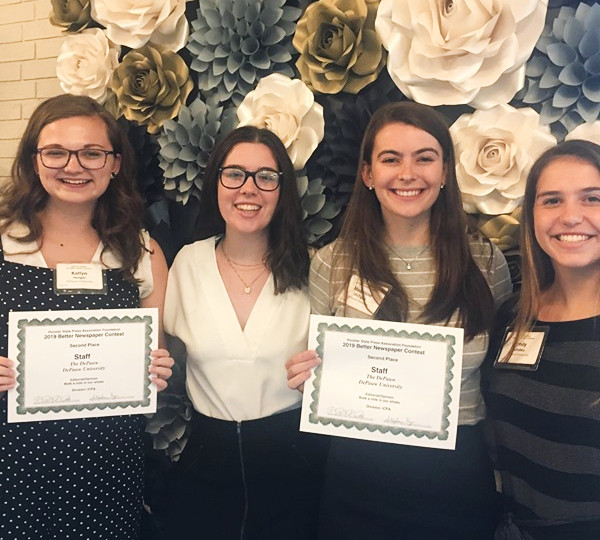 The DePauw, the completely independent and student staffed and managed newspaper on the DePauw University campus, has been honored for excellence in journalism by the Hoosier State Press Association and Indiana Collegiate Press Association. In the college division of the 2019 "Better Newspaper Contest," the newspaper's editorial board took second place for "Best Editorial/Opinion."  The award cited Katie Hunger, Maddy McTigue, Emily Schabes, Bryttni Carpenter for their work on the piece, "Walk a Mile in Our Shoes," which was published March 6, 2019.

Brooks Hepp received a third place award for "Best Sports Story" for his article, "50 years and counting: Tim Hreha finishes half a century coaching at DePauw," which was published February 25. The judges stated, "The pace of this piece is outstanding as it tells the story of one man's 50 years of coaching and playing. Stories about retiring coaches often turn into a ball of cliches. This was fresh and gave a good sense of why this coach spent his life doing what he did. "

The competition puts colleges of all sizes -- large and small -- in competition with one another. The awards were presented Saturday at the HSPA's conference in Indianapolis.

The judges wrote of the DePauw entry, "Journalism and free speech are under attack on many fronts and college campuses are no exception. This thoughtful piece is a good reminder of why we do what we do -- and why it is important."

Founded in 1852 as Asbury Notes, The DePauw has a rich tradition of being the springboard for the careers of many of America's great journalists. Alumni of the student newspaper include "business journalist of the century" Bernard Kilgore and Kenneth C. Hogate of the Wall Street Journal; James B. Stewart, Pulitzer Prize-winning former front page editor of the Wall Street Journal, bestselling author and New York Times columnist; Jason Anders, chief news editor of the Wall Street Journal; Aaron Lucchetti, an editor at the Journal; Andrew Tangel, aviation industry reporter for the Journal; Eugene C. and Eugene S. Pulliam of the Indianapolis Star and Central Newspapers chain; Donald Maxwell, former editor of the Chicago Tribune; Meg Kissinger, award-winning investigative health reporter for the Milwaukee Journal Sentinel; Robert Giles, former curator of the Nieman Foundation for Journalism at Harvard University and 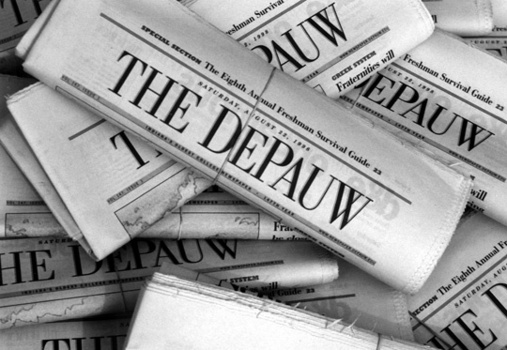 former editor of the Detroit News; Ben Solomon, video journalist for the PBS' Frontline, who was among a team of New York Times staffers to be honored with the Pulitzer Prize for international journalism; John McWethy, former ABC News Senior Pentagon Correspondent; David Greising, a former Chicago Tribune reporter and now chief executive officer of the Better Government Association; and Douglas Frantz, a Pulitzer Prize-winning former investigative journalist and author, currently serving as deputy secretary-general of the Organization for Economic Cooperation and Development.

DePauw is also the birthplace of the Society of Professional Journalists, which was founded in 1909 by students at DePauw University as Sigma Delta Chi, a journalism honor society. SPJ is one of the oldest organizations representing journalists in the United States. A 110th anniversary celebration took place August 23 on East College lawn.