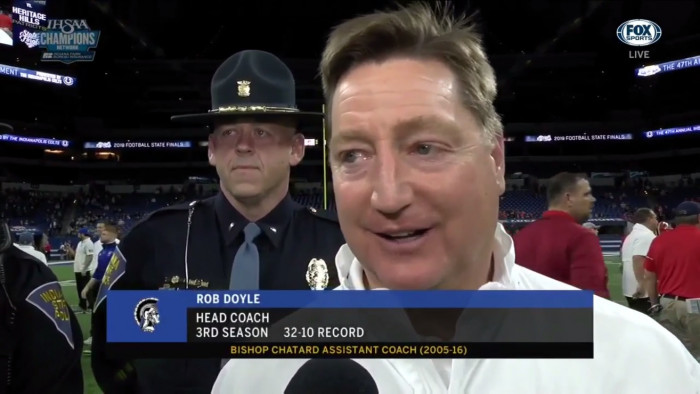 "This senior class, I've been with them four years, it's a special group," Doyle said. "I love every single one of them, we're blessed to have them."

See the interview at the website of FOX Sports Indiana.

"Chatard was the better team, at least for one evening. It did so by beating Heritage Hills at its own game," reports the Evansville Courier & Press.

"The Trojans were bullies on the ground, amassing 267 rushing yards on 7.6 per carry. It was the type of performance the Patriots had made a living doing this fall."

Doyle, who is also a partner in the law firm of Due Doyle Fanning & Alderfer, was a political science major at DePauw. He started at quarterback for three seasons and broke Tiger season marks in attempts, completions, yards passing and touchdown passes, and twice tied the school record of four TD passes in one game.  His senior season, Doyle led his team to a 9-1 record and a #9 ranking in the final NCAA Division III poll.

Doyle told Boomer TV last year, "In both jobs, we teach."  As an attorney, he works to "teach our clients, to give them good advice, to say 'here's where you need to be, here's where you don't want to be' and get them in the right position to be successful.  It's the same in coaching football, it's really teaching."

He added, "Throughout college I was blessed with great coaches.  My last coach, Nick Mourouzis, is pretty famous around the country and a great man and was a huge influence."