More than 180 years of educating leaders in disciplines as diverse as the sciences, government, the arts, business and music.

DePauw University was founded in 1837 by the Methodist Church. Originally called Indiana Asbury University in honor of Francis Asbury, the first American bishop of the Methodist Episcopal Church, the school was envisioned by its founders to be an ecumenical institution of national stature that would be “conducted on the most liberal principles, accessible to all religious denominations, and designed for the benefit of our citizens in general.” 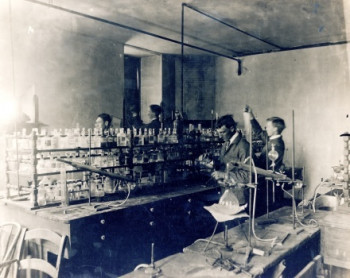 Residents of Greencastle, Ind., were so eager for the university to be located in their frontier village that they raised $25,000 – then a huge sum – to entice the founders. The Indiana General Assembly granted a charter establishing the university on Jan. 10, 1837, and the cornerstone of the first building was laid later that year.

The school began with one professor and five students. Three years later, Matthew Simpson, a friend and counselor of Abraham Lincoln, was inaugurated as the first president and the first class was graduated.

Indiana Asbury grew quickly, although many men left the university to fight for either North or South during the Civil War. Women were admitted in 1867.

When the university experienced financial difficulties in the 1860s, its leaders turned to businessman and philanthropist Washington C. DePauw, one of the richest men in Indiana and a devout Methodist who had contributed money to Indiana Asbury for various purposes. DePauw had made arrangements in his will for a Methodist university to be established after his death. Urged by Indiana Asbury trustees to divert his bequest to the school, DePauw did so and the trustees changed the school’s name to DePauw University.

DePauw and his family were particularly interested in the School of Music, which was founded in 1884 and is one of the oldest in the country. 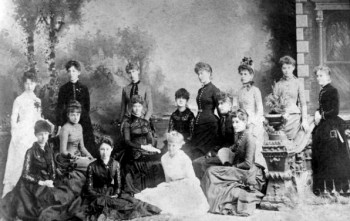 Other benefactors have significantly shaped DePauw’s history. Edward Rector gave $2.5 million in 1919 to establish the Rector Scholarship Fund, which has enabled more than 4,000 students to enjoy a DePauw education. Alumni Ruth Clark and Philip Forbes Holton contributed $128 million; the Holton Memorial Fund was established in 1999 to provide scholarships to students of “high character and with academic and leadership potential.” In 2013, Timothy H. and Sharon W. Ubben, both 1958 graduates of DePauw, committed $20 million for students’ financial aid. The Ubbens also have contributed to endow professorships and to create the Timothy and Sharon Ubben Lecture Series, which brings newsmakers from around the globe to DePauw’s campus. And in 2018, Steve and Karen Sanger, both 1968 graduates, gave $20 million to establish the Sanger Leadership Initiative, which provides leadership programming.

An ornamental gateway made of brick and iron serves as a formal entryway to the DePauw campus. Located at Locust and Anderson streets, the arch opens onto the East College lawn. It was erected in 1910 as a gift from the class of 1890 at its 20th reunion.

A massive granite boulder, given to DePauw in 1892, lays in front of East College and serves as an iconic gathering spot for DePauw students. Farmer Hiram Thomas found the boulder about 12 miles northeast of Greencastle and moved it to his farm, where he charged visitors 10 cents to view what he described as a petrified turtle. A few alumni bought the boulder from Thomas and delivered it to campus via the Monon Railroad and a wagon drawn by 26 horses.

East College is DePauw’s most iconic and quintessentially collegiate building. It also is one of its oldest. President Thomas Bowman proposed in 1861 that Greencastle and the Indiana Methodist Conferences should raise $60,000 for a new college building, but the outbreak of the Civil War postponed the project. A few years later, an architect was chosen to design the structure, which was estimated to cost $80,000.

The cornerstone was placed Oct. 20, 1870. Construction dragged on for 13 years as the school struggled to fund the project. Jesse Meharry, who once had proposed that the university be moved to his Tippecanoe County farm, donated money, as did Washington C. DePauw, enabling the university to complete the exterior, furnish the chapel and landscape the grounds. In June 1874 the building was far enough along to hold commencement ceremonies in the chapel; in fall 1875, classes met in the building for the first time. East College was dedicated at commencement in 1877.

The Class of 1879 donated a bell that was hung, appropriately enough, in the building’s bell tower, which also houses a clock donated by the people of Greencastle. For many years, the bell was hand-rung to mark special occasions, celebrate athletic victories and signal class start times. Enterprising students also enjoyed ringing it as a prank. Now the bell is controlled electrically.

Meharry Hall is located on East College’s second floor and is the site of student convocations and other events. With its wooden blinds, high ceiling, wooden pews and a picturesque balcony, it has the feel of a vintage chapel. Some students claim it is haunted.

Held in late April every year, DePauw’s Little 5 bike race has been a campus tradition since 1956, when the Union Board sponsored the race as a fundraiser for the American Cancer Fund. Fourteen all-male teams from various living units competed. Today, men, women and alumni compete in consecutive events, which were moved from the streets around East College to the track at Blackstock Stadium. Other events, such as a blood drive, mud volleyball, a car stuff and tomato dodgeball, are held in conjunction with the race.

Marvin’s – or Marv’s – is the home of the famous garlic cheeseburger, known at DePauw as the GCB. The restaurant, located at 202 S. College Ave., also serves pizza and burritos and, perhaps most to students’ liking, delivers at nearly any time of the night.

DePauw’s most intense athletic rivalry is played out annually in the Monon Bell football game against the Wabash College Little Giants.

More than 100 games have been played since the rivalry began in 1890. The Monon Bell game was voted Indiana’s best football rivalry by ESPN fans.

The Monon Bell trophy, a 300-pound locomotive bell from the Monon Railroad, was introduced in 1932 at the suggestion of DePauw alumnus Orien Fifer ’25 in a letter to the editor of the Indianapolis News. Each year, the bell is awarded to the victorious team and held on its campus until the next game. DePauw and Wabash are only 27 miles apart, so the adversaries in the game are often brothers, cousins, high school classmates or good friends, adding to the competition’s intensity.

During the week of the game, both schools hold numerous events and shared functions, including concerts, debates and a blood drive.

Old Gold Day was created in 1907 as a way to stop the increasingly violent freshman-sophomore class scraps and battles over possession of the opponent’s flag or claims of ownership of the Boulder. The first such event began with chapel at 8:30 a.m., followed by interclass games and varsity football. Other events continued throughout the day, which concluded with a meeting in Meharry Hall at which the varsity football players were awarded D appliques for their letter jackets.

The event evolved and, by 1919, it had become what it is today – an entire weekend of events that include a football game, crowning of a homecoming queen and king and banquets and parties held by Greek houses to welcome their alumni back to campus.

The Scarritt Fountain, located near East College, was a gift from 1882 alumnus Winthrop E. Scarritt in honor of his brother Alfred, who died while he was a student at Indiana Asbury. A bronze owl – a symbol of wisdom – sits atop the fountain, which has lacked water for as long as anyone can remember.

Phi Beta Kappa is a prestigious honors organization and the oldest Greek-letter society in America; the DePauw chapter was the first established at an Indiana college. Selection to the scholastic society represents the highest academic honor possible in the liberal arts. Phi Beta Kappa honors are conferred on DePauw students during the spring semester. The organization’s distinctive emblem, a golden key, is widely recognized as a symbol of academic achievement.

The Rector Scholarship is DePauw’s oldest and preeminent merit academic award. Since its beginning in 1919, more than 4,000 graduates have earned Rector scholarships, and many recipients are among DePauw’s most distinguished and honored alumni. Edward Rector described his gifts to the university as “investments in humanity, in the men and women who are to carry on the work of our country and the world when you and I are gone.”

DePauw has produced an uncommon number of leaders in the field of journalism, although the university does not have a journalism program. In particular, DePauw’s student-managed newspaper and radio station have been fertile training grounds for hundreds of student journalists. Indiana’s oldest college newspaper, The DePauw, has been named the state’s best college newspaper eight times in the last nine years by the Indiana Collegiate Press Association. WGRE Radio has a long and distinguished history of providing radio service to DePauw and west central Indiana. The Princeton Review has repeatedly ranked WGRE in the Top 10 campus radio stations and the station has been a finalist three times for the Crystal Award given by the National Association of Broadcasters. DePauw students receive a number of awards for excellence in journalism from professional associations each year.

The Society of Professional Journalists, Sigma Delta Chi, the largest professional journalism organization, was founded by students on the DePauw campus in 1909.