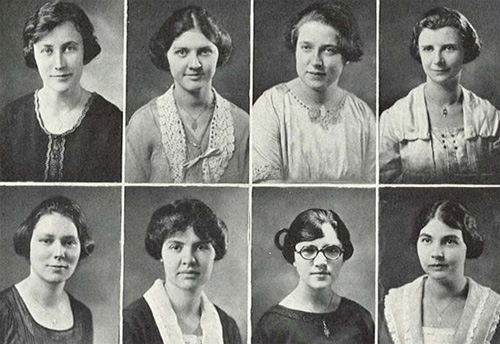 The first six women to earn Rectors Scholarships were Grace Ruthenburg and Edith Richards in the class of 1921, Judith Sollenberger and Gladys Amerine in the class of 1922, Harriet Geiger ’23, and Nina Gray ’24. A total of fourteen women earned Rectors during the first twelve years. Ruthenburg (third row, third from left), Richards (second row, second from left), and Sollenberger (second row, third from left) were the first Rector Scholars to be elected to Phi Beta Kappa, pictured above in the 1922 Mirage yearbook. Sollenberger was the first of many Rectors to teach at DePauw.

After World War Two the method by which a woman could earn a Rector changed. As it is put in the DePauw Alumnus in a cover story about Susan Price Miller ’62 “by topping all the male freshman Rectors, she won a Rector Scholarship.” In 1982, during the administration of President Richard Rosser, the DePauw Board of Trustees voted to remove the male-only restriction for entering Rectors, and since then Rector Scholarships have been open to all.

One early woman Rector, together with a Rector man, illustrate one of the successes of Edward Rector’s Investment in Humanity. Over forty years ago, Anne S. Nichols ’33 and James B. Johnson ’36, both Greencastle physicans, seeing the unmet healthcare needs of many in their community, were instrumental in the creation and operation of a family clinic. This clinic survives to this day and is now known as the Johnson Nichols Health Clinic.

The Case of the Missing Rector Scholar

From the beginning of the Rector Scholarship Program in 1919 until the late 1960’s, an annual publication of The Rector Scholarship Foundation described the scholarship program and provided a directory of current Rectors (and in the early years a list of Rector Alumni). The conditions under which a student who was not awarded a Rector as an incoming student could earn one after matriculating first appeared in print starting with the second of these publications. It said that,

"to any Freshman, Sophomore or Junior, man or woman, who receives the highest grade during the year a scholarship for the rest of the college course is given.” 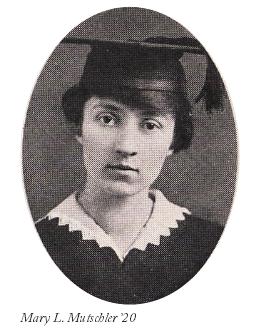 Further, it said a cash award equal to one year’s tuition “will be given to the Senior who ranks highest in scholarship during the Senior year.” During the first year of the program (1919-1920) Judith K. Sollenberger had the highest grades in the Sophomore class and Grace H. Ruthenberg had the highest in the Junior class. Both were awarded Rector Scholarships, graduated and have since been listed with Rector Alumni. In the 1920-21 academic year  Edith Richards ranked highest in scholarship in the senior class. In the November 1921 DePauw University Bulletin she was identified as a Rector Scholar and has always been listed among the Rector alumni. The mystery: Since Sollenberger and Rutherberg earned their Rectors in that very first year of the program as juniors, why was the senior who ranked highest in scholarship in that year not designated a Rector Scholar? One member of that class, a member of Phi Beta Kappa, was Percy L. Julian. However, he finished second in senior class scholarship to Mary L. Mutschler of Nappanee, Ind., who it might be argued was, or should have been, the very first Rector Scholar graduate.