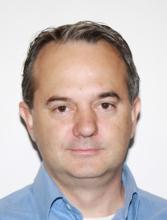 Michael Seaman earned his MA and PhD in Ancient History from UCLA. He has taught ancient history and classical civilization courses at DePauw since 2004. Recent courses include Ancient Warfare, Ancient Athletics, Ancient Greek Civilization, Roman Civilization, the Ancient World in Film, Greek Mythology, and Tales of Heroes: Ancient Epic. He has taught in the First-Year seminar program as well as the Honor Scholar Program where he regularly teaches an upper division class entitled Democracy and Imperialism in Ancient Greece. Michael has taken over 300 DePauw students abroad to study in Italy and Greece and has also taught Italian for the Modern Languages Department and courses on the History of the Italian Renaissance for the History Department. He has taught courses in Film Studies, Peace and Conflict Studies, Italian Studies, and World Literature.

Michael’s research focuses on ancient Greek and Roman history, in particular Archaic and Classical Greek history, Greek epigraphy, ancient historiography, and ancient military history. His studies of ancient warfare have appeared in the journal Historia, as well as in edited volumes published by Oxford University Press and Wiley-Blackwell. He is currently finishing a book entitled Ancient Greek Siege Warfare from Homer to Alexander and is editing a book forthcoming by Brill on asymmetric warfare in the ancient world.