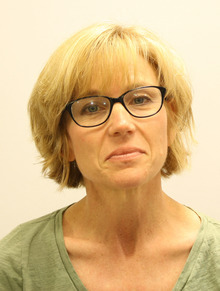 Caroline Good is a voice & movement specialist, actor, director, and costumer.  She has her degree from Northern Illinois University in Acting/Directing with a minor in Vocal Performance and is a Lessac Voice & Movement Certified Trainer.  She has trained with Arthur Lessac and Master Teachers Deborah Kinghorn, Nancy Krebs, and Barry Kur, is a member of the Lessac Training & Research Institute, and assists Master Teachers in teaching the international Lessac Summer Intensive hosted by DePauw.

As a professional actor and voice/movement specialist, she has performed in the Chicago area at Woodstock Opera House, the Egyptian Theatre, Stage 212, and with Sense of Urgency Productions, at Walt Disney World in Orlando, and at Indiana’s Putnam County Playhouse.  Her most recent guest artist engagements include playing the role of Agave and Greek chorus choreographer in Euripides THE BACCHAE, playing the role of Gwendolyn and vocal coach in THE IMPORTANCE OF BEING EARNEST, and playing Amanda in THE GLASS MENAGERIE directed by Jessie Mills at Wabash College.  Other roles include Aldonza in THE MAN OF LA MANCHA, Marian in THE MUSIC MAN, Anna in THE KING & I, Marmee in LITTLE WOMEN, and Ann Deever in ALL MY SONS as well as appearing in several student films and as a participating actor in the INDIANA FILM RACE.  She has served as a Teaching Artist at Indiana Repertory Theatre and has presented Lessac workshops in conjunction with other engagements.

She recently published a contributing chapter for OBJECTIVES, OBSTACLES, AND TACTICS IN PRACTICE (Routledge, 2019) that interweaves acting technique with the Lessac Voice & Body work, as well as other articles in publications focused on the integration of voice and movement in Greek choral ode work.  She is a member of and has presented at national conferences for ATHE (Association for Theatre in Higher Education), NCA (National Communications Association), and Lessac Training & Research Institute’s annual conferences.

Founder and Director of the “Shakespeared!” Youth Theatre Workshops since 2004, Caroline has directed her own comedic adaptations of ROMEO & JULIET, HAMLET, TAMING OF THE SHREW, TWELFTH NIGHT, MIDSUMMER NIGHTS DREAM, and others for high school and middle school students.  She also serves on the board of directors of the Putnam County Playhouse and is the chair of the Youth Theatre Workshop committee.  She visits area schools performing as Beatrix Potter, Caroline Ingalls, and Queen Isabella.

Professor Good has been the Theatre Costume Studio Supervisor since 2005.  She has designed and built costumes for QUILTERS, THE MAN OF LA MANCHA, CENDRILLON, HANSEL & GRETEL, POPPEA, and numerous other productions at DePauw and elsewhere and has taught the makeup sessions for Vocal Arts at DePauw since 2004.

The Goods especially enjoy opening their home at the end of each semester for their very popular chili dinner offering hospitality and a final exam study break for all of their students.