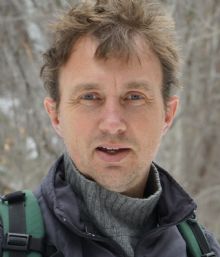 Professor of English and Co-Director of the Environmental Fellows Program

Joe Heithaus has published two books of poetry, Library of My Hands (2020) and Poison Sonnets (2012).  He earned a Ph.D. and an M.F.A. from Indiana University and his poetry and essays have appeared in numerous journals including The New York Times, Poetry, The Atlanta Review, The North American Review, The Southern Review, and Prairie Schooner.   His poem "Indiana Flight"  is etched in the stained glass mural of  British artist Martin Donlin in the Indianapolis International Airport and with the other, so called, "airpoets," he's published Rivers, Rails, and Runways (2008) and Airmail (2011).  His poem "What Grows Here" is painted on a barn just outside of Greencastle following West Walnut Street to where it becomes West County Road 125 South.   He has taught literature and creative writing at DePauw since 1996.