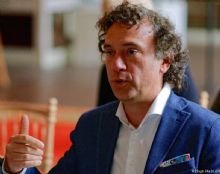 David Alvarez received his B.A. from U.C. Davis and Ph.D in English from Cornell University. He has published internationally on eighteenth-century English literature and philosophy, focusing on religious toleration, aesthetics, and the Third Earl of Shaftesbury. His current book project, “Imagining Global Religion: Empire and Secularity in the English Enlightenment,” examines the co-formation of religion and secularism as global concepts to better understand how the Enlightenment makes possible both religious freedom and colonialism. Alvarez has received a Fulbright Lecturing award for Delhi University, India, and a Ford Foundation Award for U.C. Berkeley. The recent recipient of a John and Janice Fisher Fellowship for a project on “Enlightening Shaftesbury: Collaborating on a Scholarly Edition of the Complete Works of the Third Earl of Shaftesbury,” he was a visiting scholar at the Friedrich-Alexander University, Erlangen, Germany, February-August 2017. In support of his book project, he has also been awarded a two-month fellowship in 2021 at the Interdisziplinäres Zentrum für die Erforschung der Europäischen Aufklärung (Interdisciplinary Center for the Study of the European Enlightenment) at the Martin-Luther University in Halle-Wittenberg, Germany. Thanks to additional funding from the Bavarian Program for Internationalizing Universities, he is currently a guest Professor at the University of Regensburg while on sabbatical.

Alvarez teaches a wide range of courses on Enlightenment literature and philosophy, focusing on religious tolerance, satire, the early novel and oriental tales, economics and literature, and cosmopolitanism. With colleagues in Classics and Philosophy, he co-developed a first-year seminar, “Taking on the World,” offered in the fall of 2018 in which students learned about leadership by reading historical and contemporary works of world literature. Recent mini-courses offered through the Prindle Institute for Ethics include Bernard Mandeville’s The Fable of the Bees, which Alvarez linked to an international, interdisciplinary symposium on Mandeville held April 25-6, 2019 at DePauw. His courses last year included “Cannibals, Harems, and Talking Horses: Enlightenment Travel Narratives,” “Literature and Religious Toleration,” and “Cosmopolitanism.” He especially enjoys teaching poetry.

With Prof. Alison Conway, he has edited a book collection of essays, Imagining Religious Toleration: A Literary History of an Idea, 1600-1830 (University of Toronto Press, 2019), which shows how literary studies can contribute to our understanding of religious toleration. Paper presentations in 2019 included "Global Religion, Secularity, and Violence in Daniel Defoe’s Serious Reflections During the Life and Surprising Adventures of Robinson Crusoe” and “Global Religion and Secular Cosmopolitanism in Lady Mary Wortley Montagu’s The Turkish Embassy Letters,” which was presented at the annual conference of the American Society for Eighteenth-Century Studies, where he also organized a panel on religious satire. At the Interdisciplinary Centre for the Study of the European Enlightenment at Martin-Luther-University Halle-Wittenberg, he presented a paper on “Mapping Religious Tolerance in The Tatler and Spectator” as part of a conference on “The Place of Religion in the Enlightenment.” And at the International Society for Eighteenth-Century Studies conference in Edinburgh in July he gave a talk on religious tolerance and empire in John Dryden's play The Indian Emperor (1665). In October, Alvarez presented on "Mandeville, the Passions, and Religious Toleration" at the annual conference of the Canadian Society for Eighteenth Century Studies.