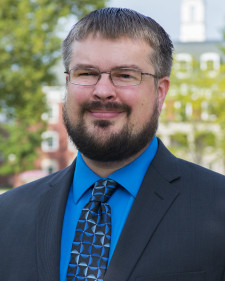 George Palton is from Cleveland, OH and completed his undergraduate studies at Bowling Green State University where he earned degrees in Music Education and Music Performance. Throughout his college search he sought personal interaction with faculty and staff - values that he brings to his new role as Associate Director of Admissions for the School of Music at DePauw University.

George later went on to complete his graduate studies at the University of Kentucky where he received a Master of Music and Doctor of Musical Arts in Tuba Performance. As a performer, he has toured extensively throughout the country and won first place in several solo competitions. He is an avid chamber musician with an interest into expanding the role of the tuba in diverse settings and is currently performing with the Four Horsemen Tuba/Euphonium Quartet. George is also an active arranger and developer of pedagogical materials with an interest into tuba and euphonium music education. Prior to his employment at DePauw he was a member of the music faculty at Marshall University in Huntington, West Virginia.

During his spare time, George is most likely behind a tuba or in front of a grill. He enjoys traveling throughout the country to sample the very best barbeque and then returning home to replicate these famed dishes.