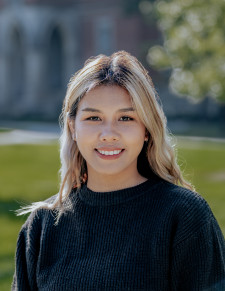 Honey’s passion for elevating global education in uncommon destinations led her to DePauw. She was born in Hakha, Myanmar and moved to the United States at a young age. She grew up in Omaha, Nebraska where she attended University of Nebraska Omaha (UNO) for her undergraduate degree. In 2018, She received her BA in International Studies with a minor in Islamic Studies and BS in Political Science with a minor in Religion Studies. During her undergraduate program, Honey was heavily involved on campus through Student Government, Thompson Learning Community and the UNO International Program. She was also a Student Director of Young Southeast Asian Leaders Initiative (YSEALI) on Civic Engagement at UNO, U.S. government’s signature program to strengthen leadership development and networking in Southeast Asia. She also studied abroad three times through a faculty-led program in Turkey, a semester in South Korea and a short-term summer program in Switzerland.

In May 2021, Honey received her MA in Intercultural and International Communication with a concentration in International Peace and Conflict Resolution from the American University. During her graduate program, Honey also worked for AU International Accelerator Program as an Admission Assistant. Honey’s passion for global education grew from her continuous involvement in international programs on and off campus.