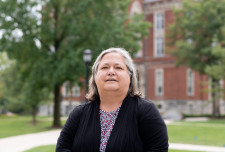 Originally from New Hampshire, Terry began her career in admissions as an undergraduate student at Wesleyan University.  She held full-time admissions positions in the University of New Hampshire, Wesleyan, Pomona, and Vanderbilt admissions offices over a 15-year period.  In 1997, Terry became Vice President and Dean of Admissions and Financial Aid at St. Lawrence University where she led the enrollment team for 14 years. She then spent three years at Colby College in the same role.  In 2014, Terry turned her attention to assisting college admissions offices, focusing on those amid a leadership transition and where programs and processes needed evaluation. Since starting this work, she has assisted sixteen colleges in fourteen states, including serving in interim roles at Beloit College, Hendrix College, Hollins University, Loyola University and, most recently, at Susquehanna University.  She has loved getting to know colleges all over the country and greatly values the friends she has made along the way (and she accomplished her goal of visiting all 50 states)! Throughout her career, Terry has been active in professional organizations at the national and regional level including serving on the Common Application Board of Directors.

In addition to earning her B.A. in English, Terry earned a Master’s in Public and Private Management at Yale. While living in New Haven, she met her husband, Matt. They now live on a small mountain in central New Hampshire, with their two rescue dogs, Gemma and Jax.