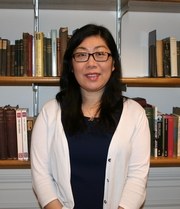 Prof. Liu's research interests include social relations in the Roman cities, the non-elite in the Roman Empire, Latin epigraphy, the reception of Graeco-Roman classics in China, as well as translating classical texts in a global context. Her monograph Collgia Centonariorum: the Guilds of Textile Dealers in the Roman West was published by Brill in 2009. An Introductory Research Guilde to Roman History (in Chinese) was released by Peking University Press in 2014 (reprint 2016; second, expanded edition, 2021). She has also published a number of articles on Latin inscriptions and the ancient associations including a chapter on professional associations in Cambridge Companion to Ancient Rome (edited by Paul Erdkamp, 2013). Thomas Blanton IV, Agnes Choi, and Jinyu Liu (eds), Taxation, Economy, and Revolt in Ancient Rome, Galilee, and Egypt came out from Routledge in 2022.

She was recipient of an Andrew W. Mellon Foundation's New Directions Fellowship (2011-2014) for her research on the reception of Graeco-Roman classics in China. Prof. Liu's reception research has enabled her to cross disciplinary boundaries, as evidenced by her presentations at international conferences with themes on Globalizing/Globalized/Global Classics and at the annual conventions of diverse academic associations including the American Philologial Assocaiton (now SCS), the Association for Asian Studies, and Comparative Literature. Her recent publication in this area is "Virgil in Chinese", in Susanna Braund and Zara Torlone (eds.), Virgil and His Translators (Oxford University Press, 2018).

As the Principal Investigator of “Translating the Complete Corpus of Ovid’s Poetry into Chinese with Commentaries", a multi-year project sponsored by a National Social Science Fund of China Major Grant (2015-2022), Jinyu Liu is collaborating with more than a dozen scholars from several countries, all of whom either have Latin, Chinese, and English for the minimum or have Latin and a variety of other languages with full-time teaching experience at Chinese universities. Along with Professors Heng Chen (SHNU) and Christopher Francese (Dickinson College), Prof. Liu was responsible for organizing “Globalizing Ovid: An International Conference in Commemoration of the Bimillennium of Ovid's Death”, which was successfully held in Shanghai, May 31-June 2, 2017. An edited two-volume set entitled New Frontiers of Research on the Roman Poet Ovid (in Chinese) was published by Peking University in 2021. Thomas Sienkewicz and Jinyu Liu (eds), Ovid in China: Reception, Translation, and Comparison came out from Brill in 2022.