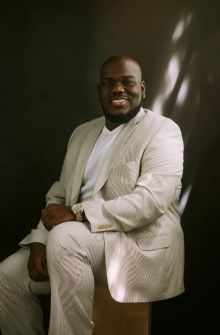 Dr. Emmitt Y. Riley, III is an Associate Professor of Political Science and Africana Studies at DePauw University in Greencastle, Indiana. He also serves as the Director of the Africana Studies Program. He was born and raised in the heart of the Mississippi Delta. Dr. Riley earned a bachelor’s degree in English and a bachelor’s degree in political science in 2008 at Mississippi Valley State University. He earned a master’s degree in political science from Jackson State University in 2010. Prof. Riley continued his education at The University of Mississippi, where he earned a master’s and Doctorate of Philosophy in political science with a specialization in American Politics and International Relations in 2014. He is an expert in American Politics, Black Politics, Legislative Politics, and Racial Attitudes. In 2018, he was named the 2018 Anna Julia Cooper Teacher of the Year by the National Conference of Black Political Scientists. In 2020, he received the Fannie Lou Hamer Award for Service from the National Conference of Black Political Scientists. He also received the 2021 G. Bromley Oxnam Award for Service, named for DePauw’s 13th president, who served from 1928-1936. This award honors a mid-career faculty member who has made significant contributions to the University, the academic or professional world, the Greencastle community, or the wider arena of civic contributions through social outreach or social justice. Dr. Riley also was named the 2021 Faculty Member of the Year Award at DePauw University.

His professional and fraternal associations include the American Political Science Association, Southern Political Science Association, Association for the Study of Worldwide African Diaspora, and the National Conference of Black Political Scientists, where he serves as Vice President. Dr. Riley is also a proud member of Alpha Phi Alpha Fraternity, Inc. Iota Lambda Chapter, and he is also the former President of the Rho Gamma Lambda Chapter in Greenwood, Mississippi. He is a board member for the Mississippi Free Press and also serves as an Educational Consultant for the College Board, Edmentum Inc., and GIS Redistricting Mentor for the Southern Coaltion for Social Justice.

Since arriving at DePauw University, Dr. Riley has served on several university committees such as the Resource Allocations Committee, Community Standards Council, Day of Dialogue 3.0, Africana Studies Steering Committee, Diversity and Equity Serch Committee, and Personnel, Policy, and Review. Dr. Riley is also the faculty adviser for the African American Association of Students. Dr. Riley is an occasional political contributor at The Hill, Mississippi Free Press, and national radio shows outside of the university. He is a member of New Bethel M.B. Church in Itta Bena, Mississippi, where he sings in the Senior Choir. He is the son of the late Emmitt Riley, Jr. and Mrs. Johnnie M. Riley. He has one sister Chiquita L. Jackson and three nieces Myeshia Hendrix, Angel Jackson, and Kalyn Jackson.

Mississippi Goddamn: The Constraints of Black Political Representation in the Mississippi Delta. Manuscript in Progress

Riley, Emmitt, and Peterson, Clarissa. 2020. I Can't Breath: Assessing the role of Racial Resentment in Feelings towards #BLM. National Review of Black Politics 1(4): 469-515.

Riley, Emmitt, and Clarissa Peterson. 2021. "Examining the Relationship Between Linked Fate and Racial Attitudes Towards the Black Lives Matter Movement in the U.S. Across Racial Goups."