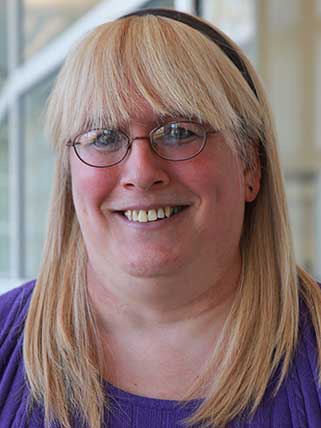 Veronica Pejril composes new and experimental music and teaches methods in contemporary music making with digital tools. An alumna of the Experimental Music Studios at the University of Illinois and the Computer Music Center at Princeton, she studied composition with Paul Lansky, Steven Mackey and Milton Babbitt.

Her music has been featured in events and venues including the Midwest Electro-Music Fest and the Field Museum of Natural History in Chicago. Pejril plays an active role in DePauw’s musical life. In 2014, she composed and performed an all-digital score for Bluebird, a programmatic modern dance production at DePauw. She was the ensemble director for DePauw’s production of The Who’s Tommy, and performs regularly on jazz piano as part of the house band for open-jams at Jazz at the Duck. An enthusiastic supporter of local musicianship, she plays an important role in Greencastle’s musical culture. She performs regionally with rock, jazz and blues groups, including The Hauskatz and War Radio. She is a summer instrumentalist at Gobin United Methodist Church and teaches piano privately to Greencastle residents. Pejril’s music is distributed digitally through iTunes, Google Play and Amazon Music.