Vernon E. Jordan ’57, a tenacious civil rights leader and a trusted adviser to American presidents, died last night. He was 85.

Jordan grew up in Atlanta but chose to come north to attend DePauw University for his higher education. He knew he would stand out as an African-American matriculant from the segregated South, and he was the only Black student in the Class of 1957 and one of only five African Americans in the student body when he first stepped onto campus. 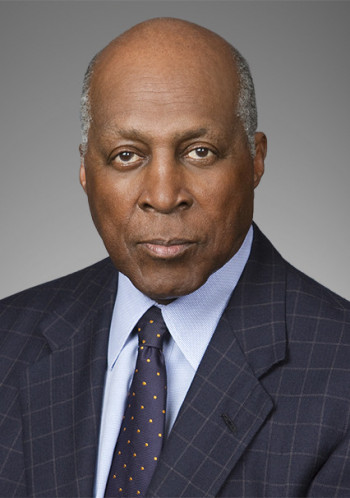 While at DePauw, Jordan immersed himself in the student senate, excelled in oratorical contests and, by his own reckoning, was something of a big man on campus.

He later said of DePauw: “I love this place – DePauw – because it prepared me to lead the life I have been blessed to live. If I were to enumerate all the great gifts this university gave me, everything I learned, or all that my education made possible, I would need at least another four years.

“But, in the interest of time – and the desire to avoid additional tuition payments – I’ll say this: DePauw University nurtured my growth and maturity. I made lasting friendships here. And if I had my life to live over again, I would return to this place.”

Said DePauw President Lori S. White: “Our community mourns the passing of Vernon Jordan, a member of the Class of 1957.  DePauw University has lost a dear friend and the world has lost a determined leader. He spoke loudly – through words and deeds – as a civil rights activist and quietly as a trusted counsel to presidents. DePauw is better for having had him as a beloved alumnus, and the country and the world are better for having him as a leader.”

After DePauw, Jordan graduated from the Howard University School of Law and quickly established himself as a leader. He became a close adviser to President Bill Clinton and one of the most powerful Black executives in America, known as “the Rosa Parks of Wall Street.”

He was first in the public eye soon after graduating law school, when his law firm won a lawsuit on behalf of two Black students – including Charlayne Hunter, who would add “-Gault” to her last name and go on to be a renowned journalist – to be admitted to the University of Georgia. A year later, he became Georgia field director for the NAACP, organizing voter-registration drives and boycotts of businesses that refused to hire African Americans. In 1964, he became director of the Voter Education Project of the Southern Regional Council. He became executive director of the United Negro College Fund in 1970, followed by nine years as president and chief executive officer of the National Urban League. He joined Akin Gump Strauss Hauer & Feld LLP in Washington D.C. in 1982, where he most recently was senior counsel; he also worked as senior managing partner at Lazard Frères & Co. LLC in New York since 2000.

In political circles, Jordan was best known as a close friend and adviser to President Clinton, for whom he ran the transition process in 1992. He had relationships with other presidents for virtually his entire professional life: President Johnson tapped him in 1966 to participate in the White House Conference on Civil Rights. President Nixon invited him to the White House in 1971, when Jordan informed the president he intended to be as candid as his Urban League predecessor had been. President Carter offered him two cabinet positions – both of which Jordan declined – and visited Jordan in the hospital in 1980 after the civil rights activist was shot by an avowed racist in Fort Wayne, Indiana. Jordan met regularly with President George H.W. Bush during negotiations over the Civil Rights Act of 1990. President George W. Bush took friendly jabs at Jordan when speaking to the Economic Club of Washington, of which Jordan was president. And President Obama, a long-time friend, celebrated Jordan’s 80th birthday in 2015.

Jordan wrote an autobiography, “Vernon Can Read: A Memoir,” and a compendium of his speeches, “Make It Plain: Standing Up and Speaking Out.” He was among the civil rights leaders interviewed at length and featured in Robert Penn Warren’s 1965 book “Who Speaks for the Negro?” He recently was the subject of a documentary, “Vernon Jordan: Make It Plain,” a chronological retelling of his life.

Jordan returned to the DePauw campus often and was the commencement speaker in 1973, 1993 and 2018. He received numerous awards: in 2018, the Anti-Defamation League’s Lifetime Achievement Award; in 2017, Harvard Law School Center on the Legal Profession’s Award for Global Leadership; in 2014, The American Lawyer magazine’s Lifetime Achievement Award and the Hubert H. Humphrey Public Leadership Award from the University of Minnesota’s Humphrey School of Public Affairs; in 2009, the W.E.B. DuBois Medal from Harvard University; in 2003, the Trumpet Award; in 2001, the Joel E. Spingarn Medal from the NAACP; in 1993, the McNaughton Medal for Public Service from DePauw University; and, in 1969, the Old Gold Goblet from DePauw. He has received honorary degrees from more than 70 colleges and universities, including DePauw.

Jordan sat on a number of boards of corporations and organizations and was an advisory member of the DePauw Board of Trustees.