Mikhail Gorbachev, who warned of impending global crises when he spoke at DePauw University in 2005, was “a giant” on the world stage, political science professor Sunil Sahu said today. 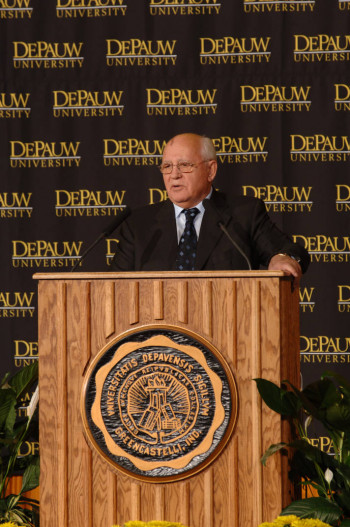 Gorbachev, who came to DePauw as part of the Ubben Lecture Series, died Tuesday in Moscow; he was 91.

“He changed not only his own country – the former Soviet Union -- but also the world,” Sahu said. “He ended the Cold War and he also presided over the dissolution of the Soviet Union. … Within a matter of months after he came to power, he disengaged Soviet Union from war in Afghanistan.”

Perhaps most significantly, “he ended the nuclear arms race. That was the big thing. And for that reason, he was given the Nobel Peace Prize. ... So yes, he was a very significant leader in the second half of the 20th century.”

Gorbachev may have been more successful and his accomplishments more appreciated on the world stage than at home, where his economic policy of perestroika was a disaster, Sahu said. Russian President Vladimir Putin has reversed many of Gorbachev’s actions and has called the dissolution of the Soviet Union the “greatest geopolitical catastrophe of the century.”

“Putin totally rejects what Gorbachev has stood for,” Sahu said. 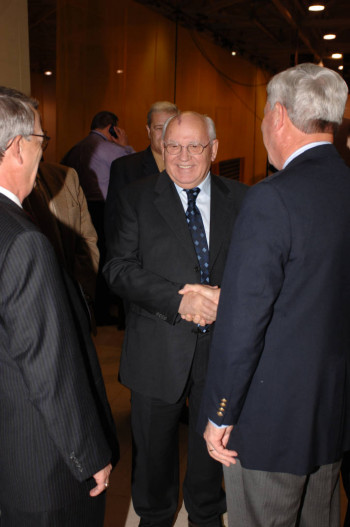 During his appearance at DePauw, Gorbachev told a crowd of 3,000 that “initially there was tremendous hope that after the end of the Cold War, which we announced when we met in Malta with President (George H.W.) Bush, ... there would be enormous changes for the better, with great expectations. Those talks, he said, created in treaties that leaders hoped would lead to greater international cooperation and “changing the world order.” He lamented that the “process slowed down, and the opportunities that we had are not fully used. Very little has been done to seize those opportunities on the international scene.”

He also harkened to a quote from President John F. Kennedy – “If a free society cannot help the many who are poor, it cannot save the few who are rich” – and warned of dire consequences if the world did not address poverty.

“In the global world, this concerns the entire world, the entire planet,” he said. “If some of us think that the 3 billion people who live in extreme poverty should be of no concern, that’s a big mistake. And if we continue to make that mistake, we could see disastrous consequences. … We can only have a common future – a future for all, or no future at all.”