Having been a media fellow who participated in theatre at DePauw, Ashley Baxstrom ’07 considered careers in communication and acting, and even spent a little time in both. 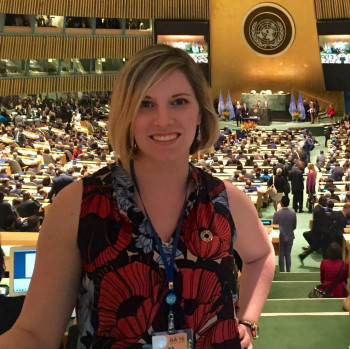 So she moved to New York to pursue a master’s degree in religious studies and reconnected with a woman who had supervised her during her media fellows internship in Rome, where she worked for the World Food Programme. In 2012, the woman asked Baxstrom if she would work – unpaid – on a project in the United Nation’s Secretary General’s office.

The answer was “yes,” and the stint turned into a series of paid contracts that kept Baxstrom “growing within that role” for more than four years. During that time, she took a line from a speech given by then-Secretary General Ban Ki-moon and launched a Twitter handle and hashtag, #zerohunger. The concept “became a movement” and was adopted as one of the U.N.’s sustainable development goals in 2015.

A year later, after working four years “on this very, very broad, big-picture issue … I was keen to get a little bit more in the weeds,” she said. She had kept close contact with former colleagues in the World Food Programme who knew she was looking, “and they poached me.”

The programme, an arm of the U.N., deploys as many as 5,600 trucks, 30 ships and 100 planes every day to deliver food and assistance to 100 million people in 88 countries. Last October, it was awarded the 2020 Nobel Peace Prize.

Baxstrom worked about seven months in the programme’s New York office, then moved to the Zimbabwe country office, where she was head of donor relations and communications. She spent time in the field, “making sure people are able to get through the day,” but mostly working to solve systemic problems and create sustainable systems that could be taken over by the country’s government. Her three-year assignment, during which she contracted typhoid from contaminated water, coincided with a severe humanitarian crisis in Zimbabwe, which was racked with recurring drought and economic crises.

Shortly before the COVID-19 pandemic hit, Baxstrom was promoted to work in the programme’s regional bureau in Bangkok, Thailand. She visited home in Wooster, Ohio, in between assignments, and ended up stuck there several months. That’s where she learned about the Nobel win.

“It’s incredible to feel appreciated for the work that we do,” she said. “… Maybe more people will look at the work that we’re doing and care about it and want to help.”

She has finally made it to Thailand, where she supports management of a $3 billion portfolio of assistance for 30 million people in 15 countries across the Asia Pacific region. And she is doing something to make things better.