Associate Professor of Political Science and Director of Conflict Studies Leonard and Mary B. Howell Professor 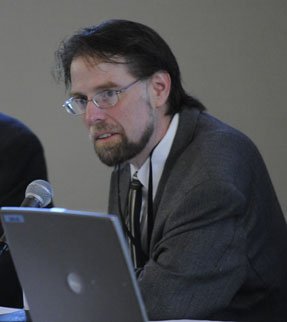 Brett O'Bannon’s appointment is in the Department of Political Science where he teaches courses in both Comparative and International Politics, including African Politics (including Winter Term courses in Senegal and Botswana), Humanitarian Intervention, US Foreign Policy and Women & World Politics.

O’Bannon has written in several areas related to political and economic development in the Third World generally, and West Africa specifically. He has published-in French and in English, in the US and in Africa- articles related to gender and development, governance and conflict management. He is currently editing a book, with John Roth, titled The Evolution of The Responsibility to Protect: Imperfect Duties? (forthcoming, Routledge). That book follows from an international symposium on Humanitarian Intervention, which he organized at the Janet Prindle Institute for Ethics. His new interest in conflict early warning has been the subject of invited presentations to the Economic Community of West African States, United Nations West Africa Bureau of the Office for the Coordination of Humanitarian Affairs and the new journal Global Responsibility to Protect (forthcoming). He supports interdisciplinarity at DePauw in many ways, including as director of Conflict Studies.