Professor Emerita of Sociology and Anthropology 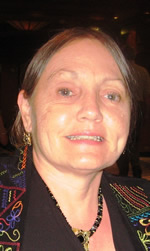 One of the founding mothers of the Women's Studies program at DePauw, Nancy Davis taught courses in sociology, including  "Gender and Society" and "Sexuality, Culture, and Power” that were central to the program for many years; other courses, such as "Social Movements" and “Protest, Activism, and Change” highlighted feminist activism and the role of women in other movements for change. She served on and chaired the Women's Studies committee and has worked in Greencastle to reduce domestic violence and establish services for abused women and their children.

Nancy's research includes publications in The American Journal of Sociology, The American Sociological Review, and other journals on incorporating women into sociological conceptions of class; perceptions of gender inequality and support for government intervention to reduce it; and, the connections between religious orthodoxy and gender attitudes in Western Europe and the U.S. Her most recent scholarship, a book with Rob Robinson entitled Claiming Society for God, chronicles four religiously orthodox movements—the Muslim Brotherhood in Egypt, Shas in Israel, Comunione e Liberazione in Italy, and the Salvation Army in the U.S.--as they struggle to sacralize their respective societies; the role and treatment of women in these movements is discussed, though not the primary focus of the book. Nancy Davis has spent sabbaticals in Argentina, Australia, Austria, Germany, Italy, and France working on these research projects.