"Former New York City Mayor Michael Bloomberg faced criticism over the weekend for comments he made about reporters at his own news publication, Bloomberg… 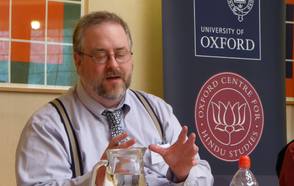 Jason D. Fuller, associate professor of religious studies and director of the Asian Studies Program, was a recent guest speaker at Worcester College, University of Oxford. Part of a workshop sponsored by the Oxford Center for Hindu Studies, his talk, "Selling Salvation," dealt with religious leader Bhaktivinoda Thakura's "decades-long campaign to re-brand Gaudiya Vaishnavism ... as a religion for modern times."

Fuller was among a group of the world's top scholars in the study of Bengali Vaishnavism, a branch of Hinduism with followers numbering in the tens of millions, invited to Oxford in March 2015. Workshop participants came from all around the world: India, Japan, Sweden, Norway, England, Scotland and the U.S.

Below is a description of Fuller's talk:

Selling Salvation: Bhaktivinoda Thakura and the Re-branding of Vaishnavism in Nineteenth-century Bengal

Until the latter decades of the 19th century, Gaudiya Vaishnavism remained an historical outlier in the reform, revitalization and recovery of modern Hinduism. Colonial perceptions that Gaudiya Vaishnavism was institutionally submerged in unseemly rural Bengali social networks/practices and controversial scriptures like the Bhagavata Purana, Gita Govinda and Bhagavad Gita led many middle-class Indian elites to eschew the tradition in favor of alternative varieties of religious devotion. It was within the context of this environment that the religious savant Bhaktivinoda Thakura (1838-1914) embarked upon a successful, decades-long campaign to re-brand Gaudiya Vaishnavism in a manner befitting its theological beauty, depth and promise as a religion for modern times. By the turn of the 20th century, Bhaktivinoda’s brand of Gaudiya Vaishnavism was positioned to succeed not simply in the colonial marketplace of religion but on the world stage.

More about the workshop can be found at the Oxford Centre for Hindu Studies website.