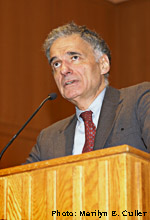 March 13, 2002, Greencastle, Ind. - Ralph Nader, well-known for his consumer advocacy, met the expectations of a DePauw audience this evening as he passionately challenged corporate and governmental control over individual citizens.

[DOWNLOAD AUDIO: "Growing up Corporate" 152KB] “We all have one thing in common to start with: We grew up corporate. We look at the world through the filters and lenses and advertisements and messages of the most powerful institution in our country, bar none, which is the modern large corporation,” Nader said.

When he alternately asked students in the audience to raise their hands if they are interested in going into public service or, instead, into a business or profession, Nader was surprised at the number of DePauw students who raised their hand for public service.

[DOWNLOAD AUDIO: "Not Very Typical" 228KB] “Well, this actually is not very typical,” Nader said, drawing a laugh from the audience. “This probably reflects a lot of the community service you have.”

Nader argued that Americans don't understand the wealth that they own as a group, including the private airwaves, public lands, natural resources and other resources that make up the commonwealth.

[DOWNLOAD AUDIO: "This Commonwealth" 192KB] “If we grow up not knowing what we own, why would we even ask the question, ‘Why don't we control what we own?' and ‘Look what we can

On political campaigns: “Public elections should be funded publicly. They should not be put up for auction. Money in campaigns nullifies your vote.”

On the quality of television news: “Isn't it time for us to raise our expectation level about what should occur on what we own as a people together, as a commonwealth?” 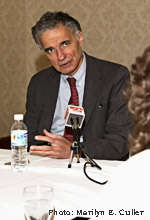 On the proliferation of corporate legal contracts: “Increasingly, the corporate lawyers who are drafting these agreements are stripping us of our rights to take these companies to court before a jury of our peers, if we have a dispute with them, if they rip us off, if they harm us wrongfully, if they deceive us. No government can do that; it would be unconstitutional. No government can take away your right to go to court and have a trial by jury. but corporations do all the time.”

Nader, whose 1965 book about the auto industry producing unsafe vehicles, Unsafe at Any Speed, said of that industry's record, “Think how many people died because simple safety devices were not put in your cars.”

[DOWNLOAD AUDIO: "Shortchanging" 136KB] He also challenged the DePauw audience to exercise their civic responsibility. “We should all ask ourselves, ‘Are we shortchanging ourselves in terms of our civic contributions?' If we don't learn how to practice democracy, we don't have civic skills. We will think that we can't fight city hall.”