"News About DePauw Has Never Been Better," Says President in Video 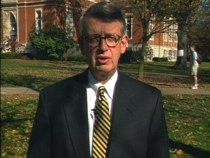 November 16, 2002, Greencastle, Ind. - "The news about DePauw has never been better," President Robert G. Bottoms says in the opening of a new video that debuted during halftime of today's Monon Bell football telecast. The five minute feature underscores some of the major developments over the past year involving students, faculty and alumni that have made DePauw a University of increasing national significance.

Produced by Larry Abed, director of television operations at the Eugene S. Pulliam Center for Contemporary Media and edited by Eric Harvey, the PCCM's 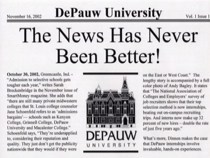 video specialist, the concept for the halftime video came from director of media Relations Ken Owen. Chris Wurster, director of alumni relations, served as executive producer of the project. Chris Newton, assistant to the director of the media center, created graphics for the video and Marilyn E. Culler provided still photographs.

You can see the video here:

[DOWNLOAD VIDEO: "The News Has Never Been Better" 9000KB] Enjoy!