March 4, 2003, Greencastle, Ind. - In a town-hall speech titled "Building a Responsible Community" and delivered to students, faculty and staff members this afternoon, DePauw University President Robert G. Bottoms discussed the issues of alcohol abuse and related at-risk behaviors at DePauw, and he said it must be a priority to develop a long-term effort to change the ethos of the campus community.

Although everyone will be involved in developing a responsible community, Dr. Bottoms said students must inevitably take leadership roles. "The responsibility significantly rests upon our students to define clearly what kind of community DePauw should be. What kind of living units should we have? What is our feeling about alcohol abuse, and what can we do before injuries or even death occur on our campus?," he asked the audience that filled Kresge Auditorium.

Bottoms, who is a member of a national group of college presidents concerned about alcohol abuse on campuses, cited the results of 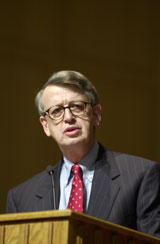 Based on the results of surveys of DePauw students in 2000 and 2002, the President said areas of concern include:

In addition, during the past year several students and campus guests were admitted to local emergency facilities as a result of alcohol abuse. Eighty-three percent of women students surveyed by the Task Force on the Status of Women felt that alcohol abuse is an issue in the Greek system, 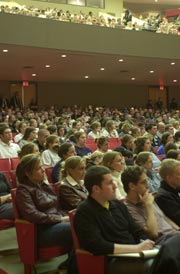 President Bottoms noted that, on the national level, alcohol abuse is often linked to two groups: Greek organizations and athletics. However, he made it clear that DePauw's efforts to address alcohol abuse need to be campus-wide in order to be effective in building a responsible community. "My goal in this address is not, as some of you suspect, to state that as a result of alcohol abuse we will ban the Greek system," he said. "We full well know that what goes on in the Greek houses also goes on in the residence halls."

Bottoms further said, "The subject is not whether or not we will have a Greek system. Indeed, we will have. That's not the issue. The subject is: What really do we want our community to be like?"

To begin to deal with the issues involved, President Bottoms announced plans to establish a campus alcohol coalition called the Coalition for a Responsible Community, w 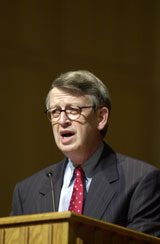 hose membership will include students, faculty and staff members, and alumni. Three task forces will be created, and they will report their work to the Coalition, which will be chaired by President Bottoms. One task force will consist primarily of students who will work with faculty members and administrators to investigate the feasibility of developing a student covenant. The second task force will work to develop a set of rules defining the relationship between the University and the Greek community. The third task force will consider ways to support leadership among all student groups on campus.

More information, including the text of President Bottoms' speech; the study by Peter Lake and Holiday Hart McKiernan '80, titled "The DePauw Greek Community: An Assessment of the Environment;" and the report of The Task Force on the Status of Women can be accessed by clicking here.