[DOWNLOAD AUDIO: "Keene's Prediction" 473KB] "I think George Bush will win in November," said David A. Keene, chairman of the American Conservative Union (ACU), this afternoon at DePauw University. But he quickly added, "If I were you, I wouldn't go out and take out a second mortgage on my house and bet on it, because we have a country that is very, very closely divided," Keene said in the third and final Gertrude and G.D. Crain Jr. Lecture of the spring semester. "It wouldn't have taken very much for Bush to win by a lot of electoral votes in the last election, or to lose by a lot ... It's not just that the popular vote is evenly divided, but it's divided in a way that can make a huge difference with a shift of a small number of votes in a very few states. So it is far from a slam dunk."

The ACU is the nation's oldest and largest grassroots conservative organization. Keene, who also works for a Washington, D.C.-based lobbying firm, is confident Bush will prevail.

[DOWNLOAD AUDIO: "Why Bush Will Prevail" 158KB] "One, I think the country has marginally continued to trend in his direction. Secondly, because he's an incumbent president at a time of crisis,

I think there's a reluctance to get rid of such a president under those circumstances."

Keene told students and faculty who gathered in Watson Forum of DePauw's Eugene S. Pulliam Center for Contemporary Media that when he served Barry Goldwater's presidential campaign as a college student in 1964, the world was a much different place. Finding books by conservatives -- let alone conservatives themselves -- was not easy.

[DOWNLOAD AUDIO: "Changing Times" 411KB] "Conservatism, if it hasn't become cool at least has become respectable," he says, adding that when Goldwater lost, "Bill Buckley wrote that it was a good thing ... because there weren't enough conservatives to staff an administration."

political director for George Bush in 1980. He also served as a senior political consultant to Republican presidential candidate Robert Dole in 1988 and was an informal adviser during the 1996 campaign.

Keene says that there is a "deep political division" in America today. In 1984, he says 18% of American voters were "in the middle" --- not Republicans nor Democrats. Today, the independent vote is 8%.

[DOWNLOAD AUDIO: "The Shrinking Middle" 249KB] "If you're a manager looking at that, you say, 'OK, there are 8% here in the middle, but only half of the eligible voters vote. So where's the gold?' The gold is not in the middle. It's not persuading moderate middle voters to come to 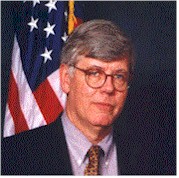 your candidate, it's doing something to get those people who aren't voting out."

That "something," says Keene, includes the issue of gay marriage.

[DOWNLOAD AUDIO: "Gay Marriage" 329KB] "It's not going to change a lot of votes, but it's gonna be one of the symbolic things that the Republicans use to turn out votes. From their standpoint, it's a relatively safe issue because of the numbers... 60-70-80% of [GOP voters] are with you, and the people that are against you on the values issues are probably not with you anyway. It's one of the things that they can touch that will mobilize their people."

From the standpoint of mobilizing Democrats, Keene says,

[DOWNLOAD AUDIO: "Howard Dean" 176KB] "I thought that the most potentially dangerous candidate to the Republicans -- save for the fact that he apparently had a clinical problem -- was Howard Dean. The reason for that was he could motivate the base better than some of the other candidates."

With the presumptive Democratic nominee, John Kerry, mulling over the choice of a running mate, Keene was asked about the chances of John McCain, the Republican senator from Arizona, being selected.

[DOWNLOAD AUDIO: "Kerry-McCain?" 121KB] "The Kerry people have approached him, as I understand it, and McCain has taken it seriously. It would certainly throw everything up in the air," Keene stated, suggesting the move could be viewed as a "hail Mary" for the Democratic ticket.

[DOWNLOAD AUDIO: "Gold Standard" 195KB] "Sort of the nightmare scenario for John Kerry would be if he picked John McCain and won. John McCain is not exactly the gold standard for stability."

The American Conservative Union chief predicts that in a second Bush term, Colin Powell and Donald Rumsfeld will not return, but he is certain that Vice President Dick Cheney will, calling him "the most powerful vice president ever." He believes that, if given four more years, President Bush

will focus on revamping and at least partially privatizing the Social Security system.

David Keene makes it clear that he takes issue with some of the president's policies. A critic of the Patriot Act, Keene says,

[DOWNLOAD AUDIO: "Patriot Act" 336KB] "I think the administration, which from a clearly political standpoint is making the question of the Patriot Act and its renewal a sort of wedge issue -- because they know they get votes when they make anybody who criticizes it look like they're being less than loyal -- from a purely political standpoint, that's smart. It's unfortunate, and it's not gonna work. It will work politically, but it won't work substantively."

Keene also maintains Bush and his predecessors in the White House have the U.S. "closer than we ought to be" to Saudi Arabia.

they don't get the blood on their hands, but the ideas that motivate come not from Iraq, not from Afghanistan, but from Saudi Arabia."

A graduate of the University of Wisconsin Law School, David Keene has written extensively on U.S. politics, is a regular guest on political talk shows and news segments, and writes a regular column for The Hill, a newspaper covering Congress. He has been a John F. Kennedy Fellow at Harvard University and was a visiting professional scholar at the Freedom Forum First Amendment Center at Vanderbilt University.