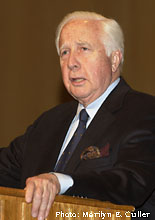 Shuford's essay focuses on Thomas Jefferson's vision of common schools. At DePauw, he notes, McCullough spoke of the founding fathers, and offers this excerpt from the Ubben Lecture: "They were steeped in, soaked in, marinated in, the classics: Greek and Roman history, Greek and Roman ideas, Greek and Roman ideals. It was their model, their example. And they saw themselves very much like the Greeks and the Romans, as actors on a great stage in one of the great historic dramas of all time... the fact that they all rose to the occasion and did what they did, accomplished what they did against the most horrendous odds, is the real miracle. And the more I know about that period, the more I read about it, and the

more I come to understand it, the more convinced I am that it's a miracle that the United States ever happened."

The op-ed is accessible at Education Week's Web site (a free registration is required) by clicking here. 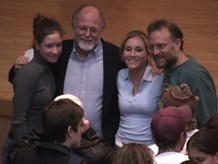