The story noted Bremer's assertion that Iraq was a "gathering threat" before the war, and that Saddam Hussein had been communicating with terrorists. It included brief interviews with several audience 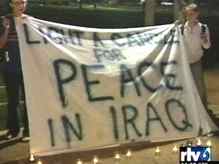 Read an account of Ambassador Bremer's speech -- including audio and video clips as well as photos -- by clicking here.