September 27, 2005, Greencastle, Ind. - "In his second incarnation -- as a globetrotting business leader working with some of the sharpest investors around -- James Danforth Quayle, 58, has proved his friends right," notes the October 3 issue of Business Week of America's 44th Vice President and 1969 graduate of DePauw University. "He has carved out a winning role as chairman of global investments for Cerberus Capital Management," the magazine states, calling Quayle "a smart-as-they-come businessman."

The article continues, "Armed with a hefty Rolodex and a potent ability to get access, Quayle is the classic door-opener. He smooths the way for deals by gaining the confidence of sellers and regulators... He's especially valuable when offshore politicians are involved. It was Quayle, for instance, who met with then-Israeli Finance Minister Benjamin Netanyahu this summer about

Cerberus' interest in buying Israel's 26.3% stake in Bank Leumi, Israel's second-largest bank. His first task after joining Cerberus in 2000 was wooing Japanese officials nervous about the firm's bid for the former Nippon Credit Bank. His longtime ties to Japan paid off, and Cerberus eventually bought a controlling stake in the bank, now renamed Aozora Bank Ltd., in 2003."

Yoshihiko Miyauchi, chief executive of Tokyo-based ORIX Corp., tells Business Week, "Quayle has given a broad sense of credibility to Cerberus. Having a respectable person like Quayle earns the trust of people who doubt the company."

The story adds, "Quayle also has shown a keen business sense as a company director, beginning in 1993, when he joined the American Standard Cos. (ASD ) board. Quayle once made what turned out to 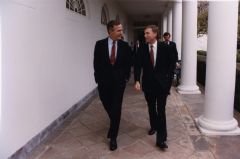 be a prescient call when he and the rest of the board rebuffed a takeover overture from Tyco International Ltd."

"There are a lot of similarities," Dan Quayle, who also served as a U.S. Senator and Congressman, says of politics and business. "You've got people who have different agendas. It's basically getting people to agree, and I've been doing that all my life in politics... I don't hold myself out as a financial expert, but I know a heck of a lot more than I did six years ago. What I do know is how to get things done."

Read the complete article at the magazine's Web site.