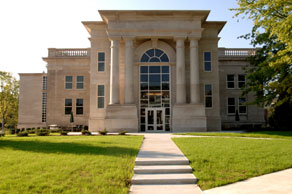 [Download Audio: "A Faculty 'Thank You'" - 143kb] "From my heart, and from the heart of all the faculty, I want to thank you for bringing this building to fruition," said Paul B. Watt, professor and director of Asian Studies at DePauw University, as the William Weston Clarke Emison Museum of Art was formally dedicated this morning. The event was part of DePauw's Old Gold Weekend festivities.

Built almost a century ago as a library, and later converted to an art building, the renovated and expanded Emison "teaching museum" reflects DePauw's commitment to the visual arts. It will serve as a home for the University's permanent art collection of more than 2,000 objects. Areas of strength include 20th-century works on paper and regional art from

the 19th and 20th centuries, as well as strong holdings in Asian art and anthropological artifacts.

James W. Emison, a 1952 graduate and member of DePauw's Board of Trustees, took the lead on the $7 million dollar project that bears his family name, but could not attend today's event.

[Download Audio: "Indescribable" - 352kb] "Without his support, this project would not have been possible," noted DePauw President Robert G. Bottoms. "And even though I am so happy to be here this morning, I want to say to Jim through our recording medium that we're so sorry you could not be with us today because words really cannot express what this magnificent structure will mean to future generations of DePauw faculty and students." 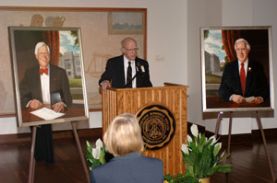 Bottoms also thanked the generosity of Hirotsugu (Chuck) Iikubo '57, Arthur E. Klauser '45, the Estate of Richard C. Paulin '51, Thomas K. '73 and Carolyn Vandiver, Bruce Walker '53, and Richard D. Wood '48. Portraits of Emison and Wood were unveiled during the ceremony. Painted by Robert D. Kingsley, John Rabb Emison Professor of Creative and Performing Arts at DePauw, the likenesses will be hung in the main entrance to the Emison Museum of Art. (photo at left shows E. Rabb Emison speaking with the portraits of his cousin, Jim, and Richard D. Wood at his left and right, respectively)

The new space is designed to complement the Richard E. Peeler Art Center, where art is created as well as displayed.

[Download Audio: "The Teaching Museum" - 242kb] "We have this wonderful first floor of museum space and teaching space -- space where we can 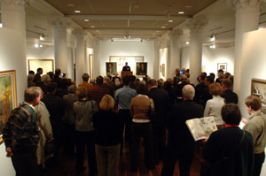 actually take out art objects and look at them close up with the help of curators," Dr. Watt noted. "Upstairs we have smaller museums and a set of wonderful faculty offices."

Jim Emison's wife, Jane, called the building "a new work of art," and noted that for the past 50 years, DePauw has been

[Download Audio: "His First Love" - 367kb] "his first love. He has not met a friend or an acquaintance that he has not informed of DePauw. So, if you didn't know about it, after you've had a conversation with him, you did." 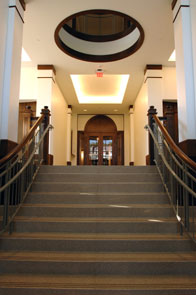 generosity, compassion and loyalty, including the many DePauw students Jim Emison has hosted as interns through the years. He recalled a time in the 1970s when Jim Emison's business travels took him to Nigeria, and he would make frequent calls back to Minnesota, where his business and family is based.

[Download Audio: "Jim Emison's Kindness" - 1022kb] "And one night, late at night, the operator interrupted, and he said -- I'm making up these words, but this is what it was -- 'Mr. Emison, I've been handling your calls every night. I would like to talk to you about education in the United States. And Jim made that arrangement, spoke to him, and then after talking to him handled his transportation to the United States, he handled his education at DePauw -- the man attended school here and graduated. This is a large response from somebody who feels dedication to a little voice of a working man late at night."

[Download Audio: "A Heartfelt Declaration" - 606kb] "I love that man," Rabb Emison added. "His business activity is large and he has many features that can draw attention, while he displays Boy Scout virtues. Today, we celebrate an addition to education at DePauw, and the building dedicated today reflects the character of 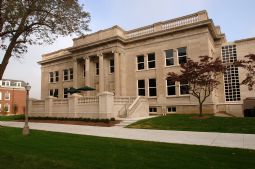 [Download Audio: "Jim Emison's Love of DePauw" - 455kb] "If you have my job, you would ever hate to say anyone is 'the' -- and you fill-in-the blank," President Bottoms offered. "But I will say that Jim Emison is among the most dedicated DePauw alumni I have ever known. I have trouble imagining people who love this University more than Jim."

Originally the Andrew Carnegie Library, construction began in early 1908 and the cornerstone for the building was laid on April 23 of that year. In tandem with the completion of Roy O. West Library, the University converted the Carnegie Library to an art museum in 1958. In the fall 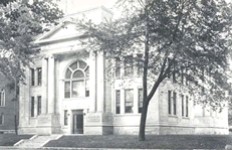 of 1986, DePauw renamed and rededicated the art center to honor a family connection that dates to the beginning of the University.

William Weston Clarke Emison was one of the founders of Indiana Asbury University (the name under which DePauw was founded by the Methodist Church in 1873). He sent two of his sons to the Indiana Asbury -- Thomas Posey Emison in 1849, followed by John Wesley Emison Sr., the first in his family to serve as a trustee of the University. Four consecutive generations of Emisons have served on the Board of Trustees -- meaning that for more than half of DePauw's history, an Emison has served on the board. In the University's 168 years, more than 40 members of the Emison family have attended DePauw.