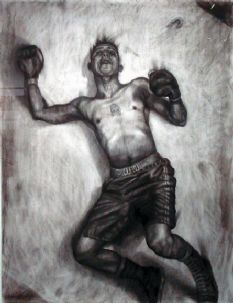 January 19, 2006, Greencastle, Ind. - A solo exhibition of large-scale, charcoal drawings by San Antonio-based artist Vincent Valdez opens at the Richard E. Peeler Art Center at DePauw University on February 1, 2006. Entitled “Vincent Valdez: Stations,” the exhibition will remain on display through April 30, and is free and open to all. (at left: He Then Fell Once More, 2002, charcoal on paper, 60 x 42 inches; Collection of Bill Colburn, Houston)

In this exhibition, Valdez uses the Passion story as the basis for a series of large-scale charcoal drawings that recast Christ as a boxer and the crucifixion as a boxing match. Embracing the dark themes of manhood and spirituality, Valdez transforms the Passion into a rite of passage, and a boy's struggle to grow into manhood by confronting his own fears. “I was thinking of the concept of a tragic hero,” says Valdez. “He was this young male who was struggling in every aspect of the world and his life. I never intended it to have anything to do with Christ as a religious image or Christ as an icon.” Instead, Valdez’ boxer becomes the everyman, our stand-in for the Christ figure, as he takes our beatings in the ring.

In order to create the technically correct and richly detailed images in the series,

Valdez studied boxing illustrations, including those made by sketch artists in 17th-century Britain, the photographs and film footage that have more recently chronicled the sport, and ESPN Classic’s Classic Fight Night. As a result, the images often conflate details from different eras; though the boxers’ clothing is modern and a jumbotron lists the score, the crowd seems plucked from a 1940s film -- it’s dotted with fedoras and the air is thick with smoke. “In order for the story to take off on its own,” Valdez explains, “it was necessary to bounce back and forth” in time. (at right: Main Event, 2004, charcoal on paper, 92 x 42 inches; Courtesy of Rose and Filemon Vela, Corpus Christi)

Peppered with scenes and figures from the artist’s personal life, most of the images do not depict the action, but rather the moments when the boxer lies felled in the ring or recovering on the sidelines -- a tactic that puts the focus on contemplation, rather than competition. “I wanted to leave it open,” Valdez says, “so you could make up your own story and decide what you want to see in it.” But perhaps the most fascinating aspect of 'Stations' is that its focus is not on victory or glory. Instead, the cycle seems to suggest that in life, as much as in boxing and in art, real success lies in being willing to confront one’s difficulties and fears -- and continuing to grow, despite them.

Vincent Valdez received his B.F.A. from the Rhode Island School of Design in 2000. He has had one-person shows at the Marion Koogler McNay Art Museum, the San Antonio Art League Museum, and the Guadalupe Cultural Arts Center in San Antonio, Texas. He is represented by Finesilver Gallery, also in San Antonio. He has also exhibited his work at Parsons University, Paris; the Art Museum 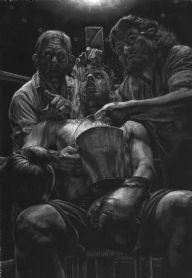 of South Texas, Corpus Christi; the Los Angeles County Museum of Art; the Smithsonian; and the Mexican Museum in Chicago. His work is included in the collection of Cheech Marin, and is part of the traveling exhibition Chicano Visions: American Painters on the Verge. He currently resides in San Antonio. (left: Keep Your Guard Up Son, Now Get Back Out There and Fight!, 2004, charcoal on paper, 60 x 42 inches; Courtesy of Rose and Filemon Vela, Corpus Christi)

On February 15, you're invited to an opening reception that will include a talk by the artist.