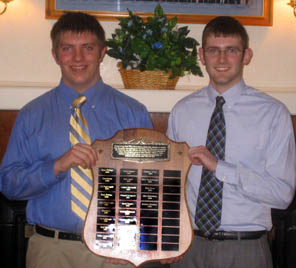 April 11, 2006, Greencastle, Ind. - Three members of Phi Delta Theta, Indiana Zeta chapter at DePauw University are being rewarded for their scholarship and community involvement through the generosity of the late Albert L. Lund Jr., a 1948 graduate of DePauw and a Phi Delt. Andrew W. Strasburg, a junior from Ann Arbor, Michigan; Paul W. Porter, a junior from Fort Wayne, Indiana; and John L. Schomburg, a sophomore from Edina, Minnesota have been selected to receive Lund Scholarships of $6,000 each for the 2006-07 academic year. The Lund Scholars were announced at the fraternity's scholarship dinner tonight. (at left, l-r: Schomburg and Porter; Strasburg is studying off campus this semester)

Albert Lund established the scholarship in 1999, to reward members of his fraternity for their dedication to academics and their involvement in campus and community activities. Mr. Lund passed away in 2003.

"My father loved DePauw University and Phi Delta Theta, and was committed to seeing his University and fraternity thrive," says Larry Lund '77 -- the son of Albert Lund and also a Phi Delt -- who, along with his sister Lindsey Lund Peterik '74 announced the scholarship recipients. "My dad didn't have the money to go to college and, without the Rector Scholarship he was given by DePauw, probably wouldn't have had the

opportunities he did. The Lund Scholarships are a way of keeping his legacy, and his commitments to his school and to community service, reaching out to new generations of scholars and leaders."