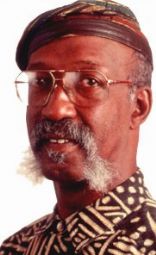 June 1, 2006, Greencastle, Ind. - "Willis 'Bing' Davis, who has Indiana connections, having attended DePauw University in Greencastle, is an African-American artist living in Dayton, Ohio," notes a story in NUVO on the 1959 DePauw graduate. "Davis makes art that engages collectors worldwide, including known personages such as Bill Cosby and the elder Bush," continues the Indianapolis newsweekly in a feature on "On the Shoulders of Ancestors," an Indianapolis Museum of Art exhibition of Davis' work, which remains on display through July 2.

"What makes Davis' work appealing to the likes of well-known Republicans as well as, say, Nelson Mandela?," asks NUVO's Julianna Thibodeaux. "It may be the fact that Davis' work is universally accessible -- we all have ancestors -- while being visually complex. His ceramics are earth-toned collages of clay with names like Ancestral Spirit Bottle and Ancestral Libation Vessel. His mixed-media drawings on stark black paper are colorfully patterned images that are also inspired by Davis' African roots. But his 'Anti-Police Brutality' masks reflect a more pointed

commentary, and they're perhaps the most aesthetically lovely of all."

Read the complete story by clicking here. A previous article on the IMA exhibition can be accessed here.