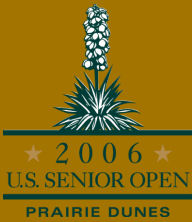 July 9, 2006, Greencastle, Ind. - "Dan Quayle was the politician on the DePauw golf team back in the late 1960s, but you wouldn't have known it the way Randy Reifers worked the rope line Saturday at the U.S. Senior Open," begins a story in today's Capital-Journal of Topeka, Kansas. "The only amateur to make the cut, Reifers, a former teammate of Quayle's and a member of the DePauw Hall of Fame, carded a 75 for a three-day total of 9-over-par 219," writes Kurt Caywood.

Reifers, a 1968 DePauw graduate, tells the newspaper, "I had a great time. It's a privilege to play here in this thing. I'd like to have about three shots back, and I'd have a pretty darned good score."

The story points out that Reifers was one stroke better yesterday than his professional playing partner, R.W. Eaks, who shot a 76 Saturday. "Certainly Reifers was miles better with the gallery, joking with fans and signing autographs... This is Randy's first Senior Open but it's far from the first honor of his career. He's won the Ohio Mid-Amateur, two Ohio Amateurs and was a quarterfinalist in the 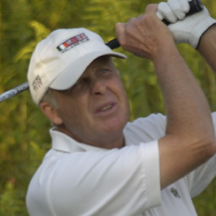 The story also notes how Randy Reifers' son, Kyle, recently turned pro and won his first tournament on the Nationwide Tour. "I'm playing this week on inspiration from him," the elder Reifers says. "Gosh, it's rare what he's done, and it's rare to be the lone amateur left in the Open. That's an honor. You earn it, but it's an honor."

Access the complete text, and a photo of Randy Reifers from the Senior Open, at the newspaper's Web site (a free registration is required). Reifers was also mentioned yesterday on PGA Tour.com. Access an online profile of the golfer by clicking here.