Prof. Emeritus Bob Calvert on 'The Challenge of Career-Driven Professionalism' 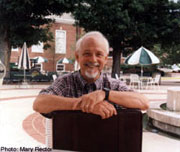 July 15, 2006, Greencastle, Ind. - In a speech to students and faculty of Walden University, Robert E. Calvert, professor emeritus of political science at DePauw, called upon his audience to consider this definition of success: "a life's work, however it may be defined as a career, that will in the end be measured not by the size of your income, though that may well be large, but by the magnitude of your contribution to the common good."  Calvert discussed "The Inescapable Civic Embeddedness of the Long Distance Learner: Challenges, Obligations, and Opportunities" on Sunday, July 9, at Indiana University Auditorium in Bloomington.

Dr. Calvert told his audience that the present-day "concept of a career tends to be equated with personal success as measured by upward socio-economic mobility and is taken for granted as a positive thing. Success these days in a career, or in a succession of careers, sometimes seems to require that the success-seeker put aside exactly what the older workaholic did -- all of one's merely private life other than work -- everything merely 'urgent,' as one Web site puts it, in favor of the career itself." 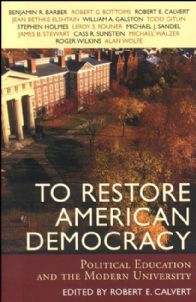 The professor's audience was made up of approximately 600 graduate students and 40 faculty members from Walden, an online university.  His remarks continued the theme of To Restore American Democracy: Political Education and the Modern University, a national symposium held at DePauw in 2003 that was organized by Calvert and resulted in a book which he edited.

An excerpt of Bob Calvert's speech is posted at College News.org.  Access the entire address by clicking here.

The professor also welcomes comments; contact him at rcalvert@depauw.edu).